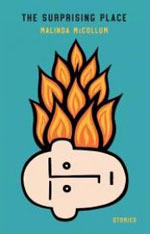 I’m reading The Surprising Place by Malinda McCollum. I recommend it highly. This is a collection of short stories written in a style reminiscent of Flannery O’Connor and Denis Johnson. McCollum's sentences are stealthy and pack a punch. She writes about people that walk amongst us but often go unnoticed. The collection won the Juniper Prize for Fiction.

How to Stop Time 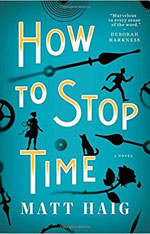 I’m reading How to Stop Time by Matt Haig. It’s historical fiction—the story of a man with a VERY long life. I recommend it because it shows the progress of culture and technology though the years, woven through an interesting story.

It’s Even Worse Than You Think 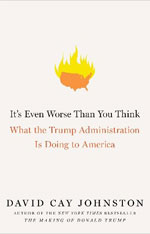 The short answer is, “yes,” it’s even worse than you think and in so many ways. Corruption, emoluments, science denial, rank incompetence, sheer brazen dishonesty—it’s all there in in 264 well-documented pages outlining serious problems in the Trump administration. The Pulitzer Prize-winning author, David Cay Johnston, was at the recent LA Times Festival of Books and was available for autographs and short questions after his panel discussion (available to see on Book TV). I would highly recommend this book though it left me sad but informed and even more energized to fight for political change.

A Gentleman in Moscow 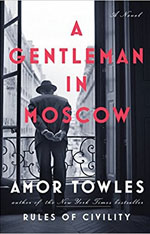 A Gentleman in Moscow by Amor Towles

Yes, highly
It’s a beautifully written story spanning more than 30 years in the life of Count Alexander Rostov, sentenced by the Bolsheviks in 1922 to permanent house arrest in Moscow’s grand Metropol hotel. I found the plot intriguing, the main characters endearing, and the glimpse of Russian history over several tumultuous decades enlightening.

Three Books from a Weekend Trip 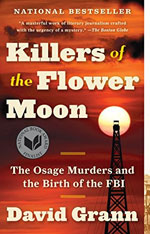 he three book that I am writing a few notes are the result of going to the books section in Costco before I went on a weekend trip with a couple of long airplane flights and then going into an independent bookstore on my trip.

Killers of the Flower Moon: The Osage Murders and the Birth of the FBI

I saw this book and it looked interesting, so I bought it! The book is a relatively easy read and covers another chapter in our history that is somewhat shameful and shouldn't be forgotten! 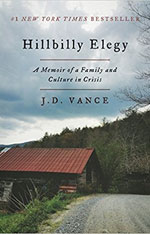 Hillbilly Elegy: A Memoir of a Family and Culture in Crisis

Once again I saw a book that looked interesting, so I bought it!

This book is about J.D. Vance's upbringing and how he got to where he is now and how he became J.D. Vance. I found this book to be a very hard read emotionally. In terms of actual reading it was not a particularly hard read. This book contains many facts and examples of what we shouldn't be doing with our children. 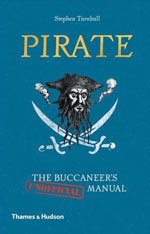 I wandered into the Harvard Book Storage in Cambridge, Massachusetts to look around. This is a large independent bookstore across the street from Harvard University. They have a fantastic selection of books. This one caught my interest, so in a moment of weakness I bought it.

This book is a fun and easy read. If you are into pirates or are considering a career change I would recommend that you read this book.

The Joy of X by Steven Strogatz 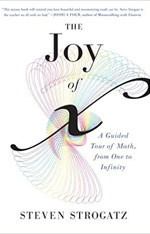 This book is especially written for people who are curious about math, but don't have a math background. It is organized into short, self-contained, easy to read chapters. Each chapter presents a different mathematical topic. There are no equations or formulas. Instead, Strogatz presents each math topic by contextualizing them in clever ways. For instance, the concept of a differential equation is presented through the story of two fickle lovers, Romeo and Juliet. The more Romeo loves Juliet, the less Juliet loves Romeo. This type of inverse relationship can be modeled mathematically by a differential equation. The Joy of X is filled with examples like this, making it a joy to read.

The Tipping Point by Malcolm 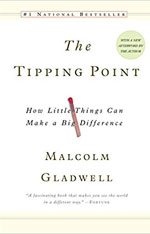 Perhaps a bit dated (it was first published in 2000), I still recommend this book. Gladwell explores why some phenomena "tip" and spread like wildfire, while other similar phenomena don't. Why did Paul Revere succeed in warning of the British, while William Dawes didn't? Why is Sesame Street so successful? Why did crime in New York City decline significantly in the mid-1990s? Gladwell suggests that phenomena like these follow three rules: the law of the few, the stickiness factor, and the power of context. He likes to take theories from the social sciences and apply them to real life. I'm very curious if a social scientist would agree with Gladwell's reasons for why these phenomena "tip".

The Undoing Project by Michael Lewis 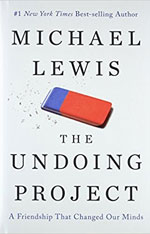 This is a good book! You will learn something and enjoy reading it (after all, it's written by Michael Lewis). The Undoing Project tells the story of two psychologists, Daniel Kahneman and Amos Tversky. Kahneman and Tversky published several significant papers in the 1960s and 70s on judgement, decision making, and prediction. Their results defied a lot of conventional economic theory at the time, and as a result, set the foundation for behavioral economics. In 2002, Kahneman was awarded the Nobel Prize in economics. Tversky unfortunately died in 1996. At its core, The Undoing Project is a story about the relationship between these two brilliant men. Highly recommended!

As I Knew Him 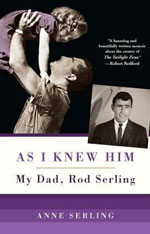 As I Knew Him: My Dad Rod Serling
By Anne Serling

Rod Serling was "Not this black and white image walking slowly across an MGM soundstage, cigarette in hand, speaking in a tight clipped voice, introducing that week's [Twighlight Zone] episode...and certainly not the dark tortured soul some have suggested," Anne Serling reveals as she introduces the famous writer to us as her loving father. Anne shares a brilliant collection of quotes and personal letters that Rod wrote to family and friends during every stage of his life (army paratrooper, activist, writer, producer, host, and [Image result for As I Knew Him: My Dad] professor), but what captured my heart were the everyday stories Anne shares about what it was like growing up with him. She recounts the time he yelled at her and her sister for talking on the phone too long only to leave the room and come back with a lampshade on his head. How after telling his wife to hurry and get in the car to leave, he'd drive it away a few feet when she went to reach for the door handle. The game he initiated and would always seem to lose whenever he and his daughter would drive to Disneyland, “Whoever sees the Disneyland sign first gets to pick out the first ride.” The sweet routine he and his daughter, who he called Pops, would go through: he’d ask her, “Whose you’re best friend, Pops?” and she’d answer, “You are.” For those of you who are more interested in Rod Serling’s activism, writing, shows, and teaching experience, this is a rich, sophisticated, and promising read that continues to offer completely different insights.

A Woman of the Inner Sea and A Lesson in Secrets 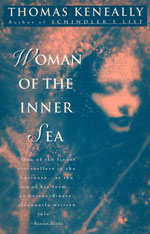 What are you reading?

A Woman of the Inner Sea by Thomas Keneally

Would you recommend it? Keneally wrote Schindler's List, and Amazon describes it as his "strongest, most compelling work since his Booker Prize-winning Schindler’s List," which seemed like a good recommendation. However I found it hard to get into. The incident that starts the story moving isn't revealed until the end, which was just plain frustrating. Once I knew what happened to the main character, Kate, the whole thing became much more interesting.

3.  What do you like or find interesting about it? Keneally's language is amazing. I have to admit, I had to read the book with a dictionary beside me, but I like that. The book is based on a true story, but the characters are really quirky and interesting (who can't love a man who has a pet kangaroo and emu?). The characters are multidimensional, except the bad guys who are really awful, and the reader cheers when they get their comeuppance. The settings of the area around Sydney and the Australian backcountry are well developed. 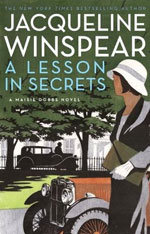 A Lesson in Secrets: A Maisie Dobbs Novel by Jacqueline Winspear

2.  Would you recommend it? This is an easy, pleasant read. I picked it up to take on a 3-week trip to Japan to have something to read as time allowed, and it was perfect for that. I am not a mystery book reader, so that fact that I'm really enjoying it is a strong recommendation for other non-mystery readers. It takes place just after WWI, so the historical aspects are also interesting.

3.  What do you like or find interesting about it? As a historical novel, it's interesting to learn what life was like in Britain right after WWI, especially the pacifism that grew out of the war. One can understand why the British were so hesitant to enter another war a couple of decades later. The setting is a college in Cambridge (independent of the university) that's devoted to philosophy and ethics. The school is founded and led by a pacifist who is murdered. The character, Maisie Dobbs, is there to see if there's anything going on at the college against the government, but then she has to solve the murder. The characters are well-developed, and the story moves along. At half-way through, I may have guesses of who the murderer is, but it's not obvious, and I have no motive. I can't say how it turns out, because I don't yet know.