My original idea for this month’s Chaparral article was to highlight all the resources available for CFT/AFT Union members. Not very exciting, I know, but it would stay with the theme and serve the membership.

But that changed on Saturday, March 24, when the leaders of the CFT Convention in Costa Mesa organized to have the delegates bussed to support the Santa Ana expression of the student-organized national “March for Our Lives.” More than 5,000 supporters gathered to listen to speeches by high school students, local school employees, survivors of other mass shootings, and the Lt. Governor Gavin Newsom. One of those speakers, Sal Tinajero, a Santa Ana Unified teacher who serves on the city’s council, clearly expressed one of the repeated message: “We need to use education as a way to stop the violence in our schools. Thoughts and prayers are cute, but then we need action.”

Speaker after speaker took the platform, building a wave of emotion aimed at creating an anti-NRA, pro-action message in response to gun violence in our schools and throughout the United States. One thing became clear as I became energized by this invigorating event: this mass political movement is clearly being led by capable, passionate and dedicated students. I was proud to be there, and I was proud of our Union that facilitated our support. 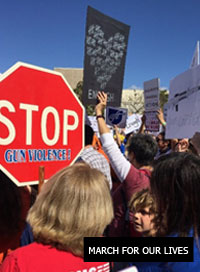 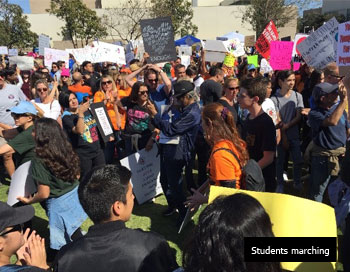 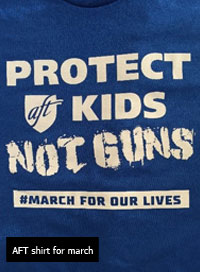 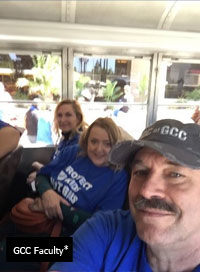 I come back to GCC with a renewed understanding of our students. As one of those high school speakers so aptly observed, “People say us millennials are self-absorbed and apathetic. I don’t think so! We won’t back down, and we want our politicians who take money from the NRA to know: we are out to get you.” This was followed by a spontaneous chant of “vote them out.” These are our students. The next time you step into class, remember the subdued passion that is just waiting to be released.

Our students are the most valuable resource we have at Glendale College. They organized a powerful and meaningful event on March 14 – the one month anniversary of the High School shooting in Florida. The 17 chairs arranged like a classroom by the fountain, encircled by police tape with a flower and candle on each desktop, were a subdued but powerful message.

We need to connect with our students – both as educators and union members – to help them understand that we also care. Let us dedicate ourselves to bonding with our students both inside and outside the classroom. If we can tap into this great potential, our college, our city, our state, our nation can soar. The future may be in their hands, but right now we can help lift them up so that they start life with greater insight and skills. Let us work so that those hands can reach higher and further.

A post-script: As I was getting ready to leave the CFT convention on Sunday, I received a text from my 2nd daughter: “Our store got held up last night. Everyone’s OK, I just wanted to let you know.” Two of my four children work at this store, and they were both there. This was an armed robbery, and I thank the store managers who simply handed over the money. It could have been so much worse, and I am thankful of that. But it is real, my fellow faculty. Guns are ever-present in the United States, and it is time to change the paradigm. Let us follow the lead of our students.