As part of the 2017-2018 GCC campus-wide theme of Civic Engagement, the coordinators will spotlight campus activities throughout the year, that are aimed at increasing civic engagement at GCC. Please let us know what you’re doing in your classes or across campus by dropping us a note at ssomo@glendale.edu and jgamberg@glendale.edu. 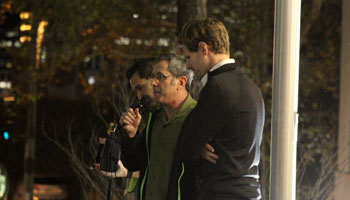 How do you define civic engagement and why do you believe it is important?

Civic engagement to me is anything we do to support the broader community we live in. We tend naturally to focus on our own needs and those of our close circle of friends and family. We want to advance in our education or career, to support our families and to develop our friendships. These are all noble and necessary, but imagine what kind of world we’d live in if this was all anyone paid attention to? We share a common space with strangers and need to collectively take care of that space. Many will try to be free riders, hoping someone else does the job – whether it’s to pick up trash, report a broken streetlight or something more significant like exposing corrupt or incompetent officials. We need to realize that if we hope someone else does it, we may or may not be happy with the result.

What are the primary barriers to civic engagement here at GCC?

People will say they have no time, and I get that. It’s hard as a student who is also working to even deal with immediate responsibilities. It’s just as hard for faculty or staff that work full time jobs and have families to take care of. But that’s only part of it. Another barrier is that people don’t believe they can make a difference. They are cynical, especially when they see their votes not counting. It’s hard to overcome all of these forces. The important thing is that it’s not all or nothing. Do a little. Call a representative, write a letter, or show up at a town hall meeting. And, for sure, read the paper and know what’s going on. And vote. If that’s all you can do, it’s OK. If you can do more, that’s better. 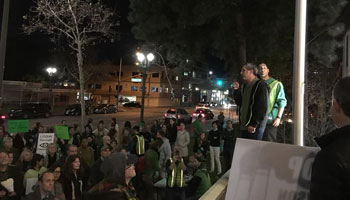 How are you addressing the college theme of civic engagement this year in your work or class(es)?

I founded the Glendale Environment Coalition to fight plans by Glendale Water and Power to build a polluting gas plant in the city. It started when I read an article on the plant and thought that it didn’t make sense environmentally or financially. With everything we know about greenhouse gasses and climate change, and all the new renewable technologies that have emerged over the past several years, why on earth would Glendale be so short sighted? I started investigating and discovered that virtually no one knew about this project. It was being driven entirely by people within the City of Glendale who had a vested interest in the plant and by consultants they hired who stand to make millions if the plant is built. None of them were thinking about the interests of the residents of Glendale or the broader population. I admit, it made me angry. I decided to turn that anger into something productive, so I gathered some friends and we started a campaign. I’ve never done anything like this before, and there are emotional ups and downs, but it’s been empowering. I know we’re on the right side of history and know I can’t give up.

Why is the above important?

This fight is important on many levels. First, we need to take a stance against anything that will lock us into years of greenhouse gas pollution (and pollutants that affect local air quality and health). The climate emergency is too existential to be able to look the other way anymore. Many people don’t want to face it because it seems so intractable, but to ignore it is to consign ourselves and our children to a future of economic and social chaos, to put it mildly. Nothing else comes close to being this important, except perhaps preventing nuclear war. But it goes even beyond that. We need to hold our leaders to account. If no one is looking, they will be tempted to do what makes sense for them personally and disregard the common good. I felt that no one was looking, so I had a duty to make some noise. The rewarding thing is that once I did that, so many good people have come forward to help. Many people have thanked me for raising the issue. In that sense, it has been very heartening.

What do you wish the GCC community knew about civic engagement?

I wish people realized that one person can really make a huge difference at the local level. In Glendale’s last election, it took less than 10,000 votes to win a Council seat. That’s only 5% of the population. Even fewer go to City Council meetings to follow what elected officials are doing. Everyone else is basically just handing the keys to the city over to this small group of civically engaged citizens. It really doesn’t take much to make change happen. And that’s at the political level. There are many non-political ways to get engaged where you can make a difference immediately on real people’s lives. Once you do it, you realize how empowering and rewarding it is, and it becomes addictive. So start small. You don’t need to make a huge commitment like I have. I never planned this. I all just happened.