Our future as a Guild in light of the Janus Case

I am proud to be a part of the United States labor movement. Our current rights to bargain collectively and work with the District to better our salaries and working condition is the direct result of U.S. workers organizing throughout the decades. The basic working conditions that most of us take for granted did not exist 100 years ago.

And they may not exist 20 years from now.

There is currently a well-organized and extremely well-funded campaign aimed at destroying unions in the United States, and particularly educator unions. We saw the first thrust of this poisoned spear in Wisconsin in 2011 where Governor Walker led an anti-teacher union campaign that has left that State’s educators unable find an antidote. That was the year Act 10 was passed in Wisconsin. Since then, the percentage of Wisconsin workers who belong to unions has shrunk from 14% to 8%, and the decline continues.

I am here to warn you: we are next. The Supreme Court has agreed to hear a case that could signal a national decline in unions that will mirror what has happened in Wisconsin. The Janus case is scheduled to be heard later this year (with a ruling soon to follow) by the pro-business Supreme Court majority guaranteed upon the appointment of Neil Gorsuch. Janus, an Illinois Department of Healthcare and Family Services worker, is suing because he does not want to pay union dues – dues to the organization that has worked tirelessly to protect his salary and benefits.

The defendants in this suit, the American Federations of State, County and Municipal Employees, has issued the following statement in response to this suit:

This case is yet another example of corporate interests using their power and influence to launch a political attack on working people and rig the rules of the economy in their own favor. When working people are able to join strong unions, they have the strength in numbers they need to fight for the freedoms they deserve, like access to quality health care, retirement security and time off work to care for a loved one.

I am writing to warn you that we – AFT, CFT and the Glendale College Guild – are next. Our ability to operate as a united faculty union to negotiate salaries and working conditions is about to be severely challenged. In the wake of a pro-Janus ruling by the Supreme Court, there will be a lure for some to wonder “why should I continue to pay into the Guild when I will receive the benefits anyway.” This is the slippery slope towards the destruction of our power as a faculty union. Without a unified front and active membership, we will quickly lose the ability to negotiate effectively, advocate for your rights, and our parent organizations (CFT and AFT) will lose their ability provide legal and organizational support that is often required to help counter positions asserted by the Glendale College District that can undermine our faculty rights.

Labor history revolves around the ongoing battle to maintain our strength against organized assaults on the laboring class. Over the last 50 years vicious and well-funded groups have successfully reduced unions. This has resulted in a continual decline in the Middle Class, the socio-economic sector that is the most directly tied to a more equitable distribution of wealth. The chart below clearly traces this link between union membership and the Middle Class share of aggregate income. 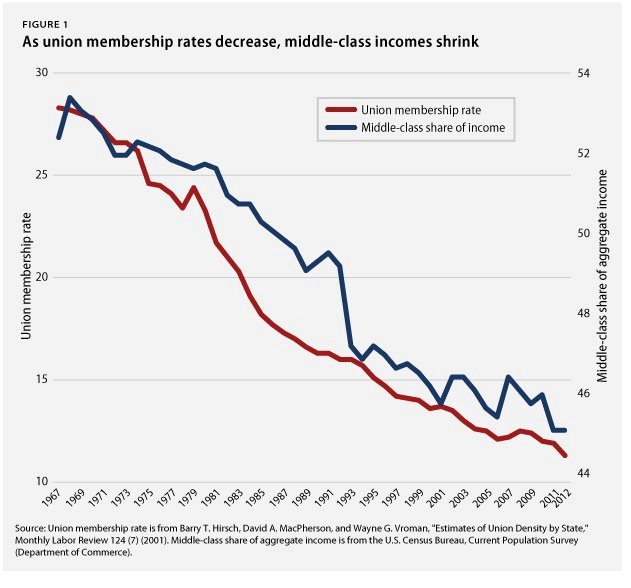 The current Supreme Court case is simply the latest in the long string of attacks aimed at people like us, people struggling to maintain a Middle Class life in an increasingly stratified society. We cannot let this trend continue, and it is up to us as members of the Glendale College Guild to remain unified in the face of this disturbing trend. Our unity is our strength. Our effectiveness is directly connected to our commitment to one another.

We are the Glendale College Guild.