What is my treasure boat?
What is my freedom god?
My law, the force, and the wind
My only homeland, the sea.[1]

This lovely poem opened the 1927 Glendale Junior College yearbook. Nautical pictures and artifacts adorned the halls and filled the students’ spirits. The yearbook was called The Log, after a ship’s log, the student newspaper was named as a pirate ship, The Galleon, and our mascot was a pirate buccaneer—a ferocious one who cheered on the teams.

Despite the threatening swashbuckler image of the school, the social life was jumping with excursions to the snow, the beach, and the desert. In addition to the trips, the Associated Students hosted parties, dances, and mixers. They were entertained by an orchestra, dressed in their finest, and those that didn’t want to dance could play Bunco. The Galleon raved, “The Mixer so thoroughly accomplished its purpose; the halls have been ringing with ‘Howdys.’”

“This is dedicated to the future of the Good Ship Glendale Junior College. In every year may she weather the storm and come safely to anchor as she has in 1928.” (Yearbook dedication)

In the first year of GJC, the idea of steering a virtuous ship was important. The students themselves crafted an Honor Code which outlined the expected no-plagiarizing-no-help-during-exams type of rules, but there was one rather startling provision: Students were required to call out the name of any cheater spotted during an exam to get him or her to stop. If the offender did not stop, an Honor Board hearing was called. Do you think many undergrads heard a name bellowed out during their tests? Chaos! Not surprisingly, 2 years later, the Honor Code wasn’t as effective as hoped with threats of the faculty taking over the enforcement of academic honesty on campus, an outcome neither students nor faculty welcomed.

Outfitted in the school colors of orange and black, the men competed in track, basketball, football, and swimming. Helmets were optional, and when donned, they were of soft brown leather. The women enjoyed hockey, basketball, tennis, track, and swimming. If a student didn’t enjoy team competition, he or she could join any of nine other clubs or associations—most of them segregated by gender.

The school was also divided into two distinct classes of freshmen and sophomores, and class rivalry was fierce. The sophomores ruled the school, and GJC held contests pitting one class against the other. Perhaps the students competed in pogo stick and yo-yo contests, maybe some pole sitting or goldfish eating, but we do know that the tug of war promised to be the “highlight of the brawl.”

Gender roles were traditional—as expected. The Galleon was full of advice on dating and campus life. The guidance included such nuggets as reminding the students to court smart girls since studies showed that female students with high IQs sat dateless on the weekends. The students were also advised to stop acting like high schoolers: “Please stop wearing your high school pins, sweaters and emblems.” They were also advised to date the college girls and stop “snatching the cradle” by dating high school girls. When a debate swelled about whether or not to give teachers holiday presents, the advice was: “What do you get in return? A good grade?” “If I give her a present, will she think I’m trying to get a good grade?” The solution: “Buy a real swell present and lots of cards. Give the present to the best looking girl in the class, and send that teacher a card.” 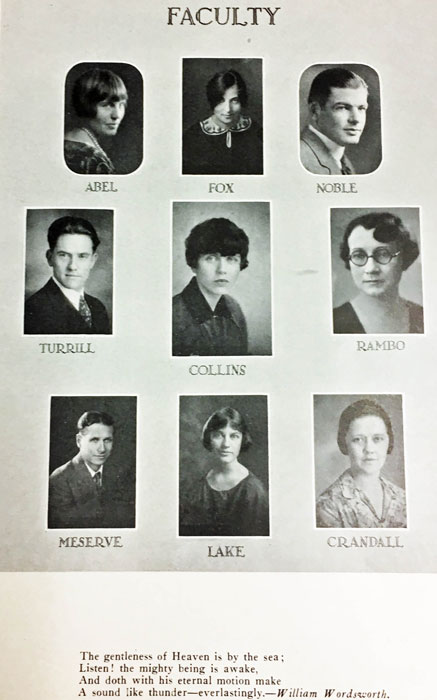 Despite the exuberance, activities, sports offerings, and classes, the school was run by only 14 staff members. Along with a separate Dean of Women and Dean of Men, a mere 9 faculty taught the classes—which goes to show that you don’t need to be big to roar!

Sources were all from the GCC Library Archives. Included is information from The Log and The Galleon publications, 1927-1929.