A Conversation with the Davitt Award Winners 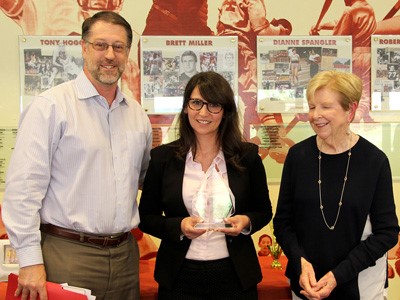 Often times, if you work in student services, it’s obvious that you interact and support students in a direct way. However, we often have GCC employees who serve students without students even being aware of their work. Practically, every student (and staff) at GCC has come across or has been impacted by the work of Ann Simon, the recipient of the John A. Davitt Award for Outstanding Service (Classified) for 2018. I sat down with Ann to find out a little bit about her experience at GCC.

When asked how she ended up at GCC, she laughed and stated that it was an interesting path. Both her sisters had attended GCC and she had promised herself that she was not going to continue in their path (at first). So she enrolled at Cal Poly Pomona and had an epiphany during her typography class; it was there and then that she decided she wanted to work in higher education but she had no idea where. As she says, “There was a part time opening and I applied and was part time for about two years. Then there was a retirement in the department and I applied and got the job!” That was approximately 11 years ago and she hasn’t looked back since.

I also wanted to know what she liked the most about GCC and what she had gained by working here. Her response, without a pause, about what she liked the most was “students and graduation.” She believes that graduation “showcases the beauty of community colleges and you see the diversity of students here, which is unlike anywhere else.” As far as what she has gained while working at GCC, her response is straightforward: patience. “This job has taught me to listen to people and not just about a design they need done but just listening to coworkers. Sometimes, people just want to be heard and that means a lot to them.” She also states that learning active listening skills has shown her how GCC is a microcosm of the world. We all have similar concerns and GCC employees are no different.

Drew Sugars, who is Director of Communications and Community Relations at GCC and Ann’s supervisor, says about her: “I’ve worked with Ann now for about nine months and have experienced firsthand the quality of her work… a result of her intelligence, dedication to excellence, and her willingness to collaborate.”

As far as what changes she has seen since she started working at GCC, she mentions several. In the last 11 years, a lot of technology has changed and we now have access to much more than we did before. In addition, “teaching methods have changed a lot, which I think has opened up the campus. There is a lot more attention to diversity and equity, which has become the heart and soul of the college.

Finally, I asked her what it felt like to win the award: “It was a shock! I’m coming to work and just doing my job, which I love and I really enjoy working with students when they need something. It’s an honor. Just complete shock!” 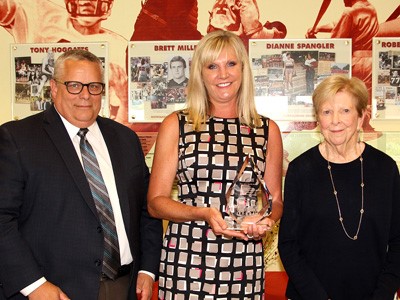 One of the great things about GCC is that we enjoy a very safe campus. This is not something we think about on a daily basis but it is thanks to our campus police. Part of our campus police team and one of its leaders is Police Sergeant Erin Kurasz, winner of the John A. Davitt Award for Outstanding Service (Management) 2018.

Erin is one of the many staff members who is a former GCC student. “I attended Glendale Community College in the Fall of 89 and began taking general education courses and administration of justice classes. Also in the Fall of 89, I had become aware of the public safety department at GCC in which I applied and was hired as a parking attendant and a safety officer. This was back before it was a police department.” Upon transferring to Cal State Los Angeles, she earned her B.S. in Criminal Justice while minoring in Sociology. Having worked a variety of positions before ending up at GCC, she was hired by GCCPD in 1999 as the first female officer. Eventually, she was promoted to the position of Sergeant in 2010.

She says that what she enjoys most about working at GCC is that “no day is ever the same. Each day I am presented with new challenges and situations, which really helps me to stay focused and interested. I feel the work I do every day makes a difference to the people on campus, and our community. I know when I go home that I truly did something meaningful and important.”

There are many skills that a good police officer needs. These are not just technical skills that every officer needs but often go beyond that. “Working at GCC as a police officer over the past 19 ½ years, I feel that I have gained the ability to use good judgment, to problem solve and show initiative.” Additionally, she states that “while enforcing the law, I have also learned empathy and compassion and to demonstrate courage and take responsibility.”

Chief of Police Gary Montecuollo says about Erin: “She epitomizes a community policing philosophy. She is approachable, collaborative, compassionate, and engaging.”

Her favorite part of working at GCC is definitely the environment on campus: “There's a good sense of team spirit.” She believes in a strong work ethic, but “the human side is also important. I enjoy working with people who have a sense of humor and who, while they might take their work very seriously, don't necessarily take themselves overly seriously! I like people who are down to earth but who have a dynamic and progressive approach to their work.”

Being a lifelong resident of Glendale, she says that she was drawn to GCC mainly for her education. However, “after completing my education and working a brief period of time here, then leaving for several years and being away, when the opportunity arose to come back and apply for the police department, I just knew it was meant to be and where I wanted to be.”

The three words that she says best describe GCC are: “Diverse, Family-Oriented, Engaging.”

As far as what it felt like when she won this award, Erin says: “I was elated by the gesture from my coworkers. I just appreciate that others recognize my dedication!”