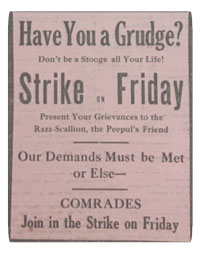 The United States was squarely in the middle of the Great Depression. Social reformer, author, and socialist, Upton Sinclair, was running for Governor of California. Socialism offered a way out of the economic hard times and the Jaycees (Junior College students) were interested. The students published a special edition of the school paper offering a satirical look at what might happen if Glendale Junior College was taken over by the communists. Were they pro or con? You decide!

Location: The student newspaper, The Galleon.

The Razz-Scallion was inserted into the “non-red” school paper, The Galleon. (A galleon is a large pirate ship. The school mascot was a fierce pirate with a knife in his mouth, so fittingly, the newspaper was named after a pirate ship. Notice how cleverly Scallion and Galleon rhyme! And, of course, the meaning of Razz is to tease or make fun of.) The new Razz-Scallion cub reporters sank the “good ship Galleon” by “crashing their masthead,” “dot(ting) their eyes, and split(ting) their infinitives!” Horrors! The Galleon plummeted to the bottom of the sea. 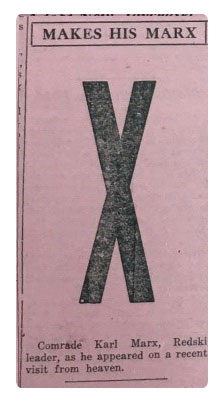 Students’ demands: Students demanded no more than 30 hours a week study, including class and at home work; no examinations; and they were to be paid $15 a week for school time. They would “go to school only when they want(ed) to and study only what they are interested in,” with no exams. Teachers were to sit by in the classrooms, and wait passively until they were asked for help. Once the students felt they had gone to school long enough, they were to be declared educated. This education was to be “rose-colored-glasses outlook without the additional expense for the glasses.”

There Were Red Miracles: Karl Marx came down from heaven to endorse the student strike. Marx had been busy up there all these years organizing the harp-markers and working against their exploitation. In an insulting remark about the GJC band, the Razz-Scallion journalists reported that Marx “generously” offered the breed of harpers that were tone-deaf to the college band since “they’d fit right in.”

Other public figures voiced their support of the striking students as well. In August of that year, Hitler had just become Fuhrer. Before WWII, he was popular in Germany and around the world—it’s important to remember that the students had no way to see what would ultimately happen as a result of Hitler’s destruction—it hadn’t happened yet. In that context, the Razz reporters thought it would be quite humorous to have Hitler make an appearance in the Red Edition. The paper reported that Hitler supported the strike and that he was “deeply moved by the enthusiasm and zest of stoogents at Jaceeski.” Hitler further offered encouragement to the students by saying that “the overthrow of all capitalistic orders is inevitable.” 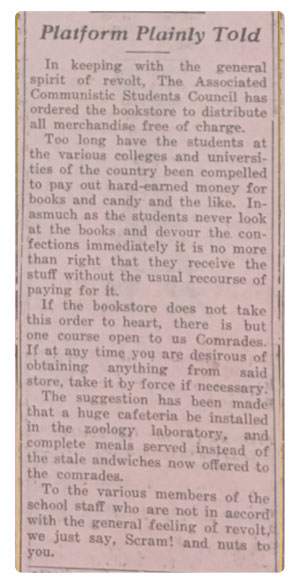 Free Goods for All. Take by Force if Necessary: From the Razz-Scallion: “In keeping with the general spirit of revolt, The Associated Communistic Students Council has ordered the bookstore to distribute all merchandise free of charge. (…) Too long have the students at the various colleges and universities of the country been compelled to pay out hard-earned money for books and candy and the like. Inasmuch as the students never look at the books and devour the confections immediately it is no more than right that they receive the stuff without the usual recourse of paying for it.” Their advice: “Take by force if necessary.”

Carnage Sports: We Want Gore! Even the athletic department transformed into the “Athletic More Gore industry.” The school colors were changed from orange and black to red and black. The athletes, “despite scratchy whiskers” sported bushy beards and battled for Commie rights. The playing fields were filled with blood and butchery. A bomb-throwing contest article warned that “once in a while a bomb goes off in the heaver’s hand and when that happens, blood and flesh are scattered quite freely.”

The athletic committee agreed on some new rules: “All teeth, fingers, and chunks of flesh weighing less than a pound are the inviolate property of the possessor (…) baskets are to be placed along the sidelines at convenient intervals.”  Spectators were advised not to attempt the theft of the severed body parts! “Severe penalties will curb poaching bones, limbs, etc from the opponents’ baskets.”

The teams were cheered on by newly elected “Jeer leaders.” The Jeer Leaders were assigned to organize the booing which previously had been done randomly and with no teamwork for far too long. 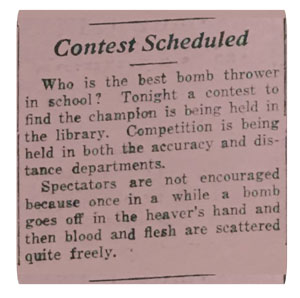 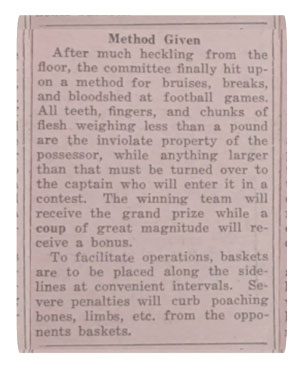 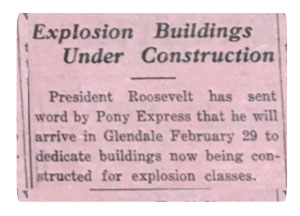 Explosives Classes at GJC: Successful classes were conducted to instruct the students to explode buildings. The buildings were to be constructed at a cost of 2 million dollars each. They were insulated with silver and trimmed in gold. One was called TNT Hall and President Roosevelt himself was scheduled to arrive in February to dedicate the buildings. 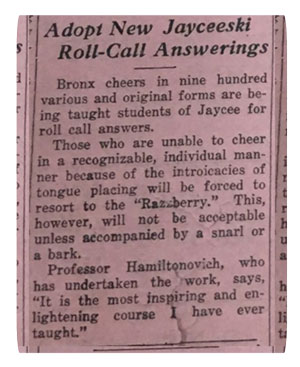 Roll Call: The Razz-Scallion announced that students no longer had to respond “Here” or “Present!” in answer to their names at class attendance. Instead, they were instructed to utter a loud hiss, hoot, jeer, or razz as loudly as possible. If lessons were needed, they were available. The professor in charge, Professor Hamiltonovich, declared the Bronx cheer class “the most inspiring and enlightening course I have ever taught.” (Note: A Bronx cheer is a loud sound of flatulence made with the mouth in order to insult.) 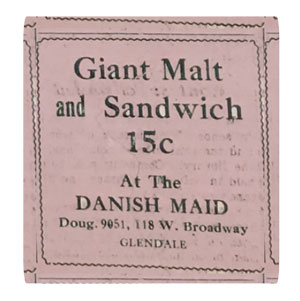 And Finally: If the strike, the communists, and the social reform efforts were all too stressful, never forget that the students were still in the innocent age of the Thirties, and students could enjoy and malted milkshake and sandwich for 15 cents at The Danish Maid, steps from the campus which was then located at Harvard and Brand Blvd

Thank you to the Glendale College Library Archives for supplying the pictures and the information for this article.