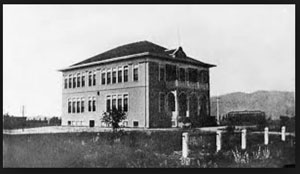 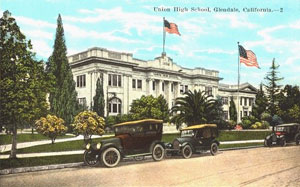 On April 6, 1927, Glendale Junior College is formed as part of the Glendale Union School District.

Just four months later, in September of 1927, the college opens in the local high school building on Brand and Broadway—a wooden building fondly known as the “Cheesebox” because of its bright yellow color. 139 students attend and study English, Foreign Language, Math, Social Science, Commerce, and Mechanical Drawing.  (This is now the site of the Marshalls store.)

In September 1929, Glendale Junior College rents a wing in the Glendale Union High School on Harvard and Louis, where the main branch of the Glendale Public Library now stands. The yearly fee is $30,000.

The building suffers severe damage in the earthquake of March 1933 and is condemned. Glendale Junior College needs a new home.

Tent City is formed! College classes are held in smaller buildings and tents outside the Harvard High School building. This arrangement lasts for four long years when, at last, after two attempts, a bond is passed, giving funds to the college for the purchase of land for a permanent campus.

The first purchase is twenty-five acres on Verdugo Road at a cost of $30,000—the price of a year’s rent in the Glendale Union building. The construction cost is $299,495 for the two original buildings. In March 1936, the construction begins! A year later, two buildings, our Administration Building and a Science Building, are completed, opening a year later. In that same year, the Student Union Building is erected and the hills are graded to make way for athletic fields.

Thank you to the Glendale College Library Archives for supplying the pictures and the information for this article.