I cannot imagine I was the only one who walked onto campus on a bright, clear morning this past Spring and thought … “Whoa!” And then, “Is this ….sanctioned? Did a student just up and do this in the middle of the night? A staff member?”

Another day, and another planter was painted. And then another. By then I was not only filled with delight and gratitude for this mysterious art elf, but I also thought of a poem about Harlem that I used to teach to incarcerated youth (when I worked for California Poets in the Schools). The student-writers would use it as a jumping off point to write about the ways in which they find splendor in the marginalized, the unnoticed, or the unseen. 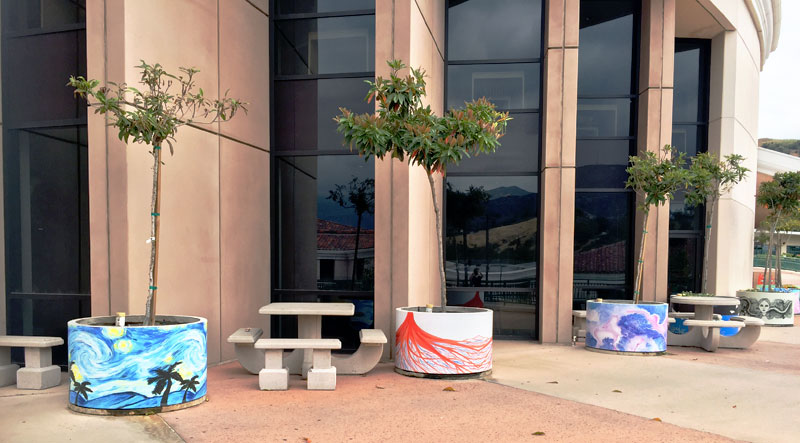 Here are the first few lines from the beginning of Jayne Cortez’ Under the Edge of February.

So I thought of poetry, and of art elves, and I was full of questions. How did this happen? Was it guerilla art? Was this years in the planning? I searched high and low for the perpetrators of the painted planters plan, found them, and asked away. I not only learned how this project came about, but I was inspired by our conversation to take a more active role in contributing to the best version of GCC that we can envision. I hope you enjoy the conversation too.

CHAPARRAL: What made you think to do this?

BETH KRONBECK: The ASGCC students were out there [encouraging] everyone to fill out an application [for Campus Project Support].  I said, “Let me ask you guys a question. You see those planters out there? What if we had art students paint them?” And they said, “Oh my God, that’s such a great idea!” And then the Friday that the applications were due an email [reminder] pops in, and I’m at home, and I hadn’t run it by anyone. So I emailed David, and [David] emailed me back within an hour … “If you write it up, we’ll do it.”

DAVID JOHN ATTYAH: What was I thinking?

BETH: My original idea was we we’ll just get some paint. I just wanted … color.  So they funded it, but not the full amount, so we had to take it to Campus Development. David sent our new full-time Studio Art faculty Kyla [Hansen]. They voted unanimously for the project and I turned it over to [the Studio Art department].

CHAPARRAL: When you got Beth’s email, what were you thinking?

DAVID: Interestingly, I walked down that pathway a million times and didn’t even notice the planters. The first thing I did was run out to see there really are planters here.

Part of the reason why the Studio Art department hasn’t come forward with these sorts of projects on its own is because, since I’ve been here, there has been a general desire to make the campus look as consistent as possible. We really have one of the most consistent “campus looks” of any college I’ve visited.

The other thing I know from my experience public art is that people have a hard time committing to something permanent. So I proposed doing the digital prints that you tie on to the planter.

BETH: I thought it was brilliant because students aren’t stuck out there in the sun painting with students walking by ....

DAVID:  And I think it’s also a way to get quality control. Someone can say, “I can’t wait to paint a planter,” but it’s actually a huge project … that’s four paintings!

BETH: It was so exciting.

DAVID: The roll out was intended to be a little mysterious ... (although it’s also the case that Studio Arts has a lot of projects to manage).

BETH: David told me one was up and I was like, what? What? I don’t walk by there as often as I used to. It was so exciting.

In Fall, we did send out an email where the campus community got to vote for their favorite selections.  It was interesting because the votes split evenly down the middle. People either liked the more fine-art looking [set of] images, or the more graphic-looking ones.

Davin Knight (Studio Arts) found a local Glendale vendor willing to print them for us at a discounted rate [so we were able to produce both sets of images].

CHAPARRAL: So will there be more?

DAVID: Kyla Hansen, who heads up our 3D program has proposed a related bench project. So if that gets funded, we’ll have the planters and the benches. I have to give Dr. Viar credit too, who feels that the arts need to be more present in every possible way on campus and has been supportive of these efforts.

BETH: People really like it. And going back to Dr. Viar, when we were doing the mission posters for accreditation, his comment was, “Why are there pictures of buildings? Why aren’t there are pictures of students?”

DAVID: Credit to campus development too for being open to the experiment.

CHAPARRAL: What is some of the feedback you’ve heard?

BETH: This is so cool. It’s amazing.

DAVID: Students have said to me that they feel that people didn’t congregate or utilize that area so much, and that now it’s used more. The project dovetails with the Art Gallery mission. Between the gallery, and the library, we’re trying to make LB a little bit more of a destination. There’s another project going on now where we’re going to bring artwork from the Brand Library and install it in our library.

I’ll say personally that … because as an art professor I look at students artwork all the time,  I didn’t realize that other felt that they wanted to be more visually stimulated on campus. I was a little nervous that people would think maybe it makes the library look inconsistent.  It was a surprise to find out that people wanted to see more art rather than wanting to see less art or being neutral. And that vision comes from Beth. 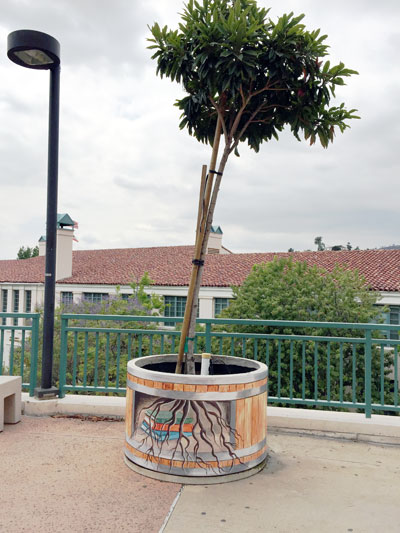 CHAPARRAL: What advice would you have for faculty who are kind of looking around campus and thinking about things?

DAVID: One of the things that’s always been confusing to me about GCC is how separated our verbal/literacy-based education is from our globally/visually-based education.  The reason why it was my pleasure when I got the call from Beth is that I think need to move in a direction in which we integrate visual and literary activities.  This is the trend across teaching Studio Arts.

I see that my teaching is grounded in teaching students both how images are made AND how viewers parse them    Our students are in programs where they’re learning about literacy, reading , analytical thinking and critical thinking  … what worked for me about the project in my class is that those things got to come together with visual analysis and global thinking.  It wasn’t just make a picture that you like. You had to be thoughtful about the environment, thoughtful about who your viewers are going to be.

It’s always been my belief that I think that liberal arts education is stronger when students are working across the literary, visual and scientific fronts.

This particular project didn’t have quite as much science although I will say, getting the measurements on the planters … I had to teach my class to calculate circumference from diameter. A lot of the students were [asking] “How long do I need to make the image?” And I replied, “I’m not going to tell you.” And they had to figure out what part of the image would face in, what part would be against the wall, whether the image would repeat.  We also had to discuss how color translates across different media, which requires some understanding of the science of color.

Had I foreseen it, it also would have been a place to bring in the math department. If we were going to continue with this, it requires a little bit of brainstorming to figure out who really are the players. Who sees the planters everyday? Who has to encounter them everyday? Who studies next to them? With enough lead time and a little more room, the project becomes much more than just campus beautification. I think campus beautification implies we’re just putting ornaments up.

The theater department is putting on a series of plays this semester, and they started to do chalk drawings on the outside of the theater, AU, in order to get people excited about the plays. I think a lot of people think about public [art] as permanent and external and invasive. And I think what worked about this project is that we figured out a way of building it to be more experimental, a little more open-ended. I think it was really smart to start with planters, because walls are rough. And then people own walls. And they argue about walls. But who’s arguing about planters?

BETH: And that’s what I thought was brilliant too about … the wraps. Because, one, the students can keep them if they wanted too, and [two], if someone’s really upset about something, you just use scissors and it comes right off.

DAVID: And then that leads into the chalk drawings which are just washed off with a pressure washer. So I think there are ways we can toy with how the campus looks without feeling like it’s permanent, or damaging.

BETH: There are a lot of great things we could be doing on this campus. And we’re all so busy. But if we could even just do half of it. My advice would be that if you have an idea, then talk to somebody who might know who else you could talk to. Find like-minded people and make something happen.