GCC Unites as a #Sanctuary Campus 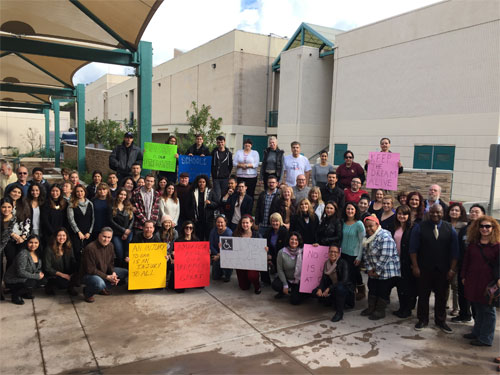 On January 19th students, faculty, and staff from Glendale Community College  gathered for a rally in Student Center in solidarity with the American Federation of Teachers and educators across the nation, to join the movement to declare GCC a #SanctuaryCampus and public space of resistance and protection for our country's most vulnerable people including undocumented students, LGBTQ, Muslims, women, and all people of color.

Resolution in Affirmation of Faculty Support for Students

On February 21, Guild membership adopted the Resolution in Affirmation of Faculty Support for Students at its first regular meeting in Spring. The resolution “reaffirms our commitment to fostering a diverse, inclusive, and safe learning environment for all students,” and calls for a joint task force to examine policies and procedures to make GCC a “safe zone” for our students.

Caroline is leading the team in negotiating Guild proposals carried over from the Fall semester, and[is currently collecting reopener suggestions for the 2017-2018 negotiations cycle.  A survey on reopeners will go out to Guild members soon after the March 20th deadline for submissions.

Faculty, this is your opportunity to get involved in union leadership.

Nominations for elected positions on Guild Executive Committee is open now through March 22.  We will hold a secret ballot election, and elected officers will start their positions on the last day of Spring.

GCC’s Wellness Coordinator, Erin Calderone, has hit the ground running with a wellness program including faculty/staff hours at the Fitness Center, spin class, workshops and lectures.  Check out the wellness website glendale.edu/wellness and stay well!