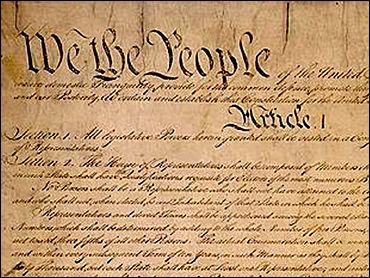 The First Amendment guarantees every citizen of the United States the freedom to express him/herself without fear of government restraint. Here at GCC we need to remember that we have an obligation to protect and defend freedom of expression on our campus. When disturbing forms of expression appear at GCC and we are tempted to immediately prohibit such expression, it is wise to remind ourselves why protecting freedom of expression is so important.

The fundamental reason to defend freedom of expression, even when the expression is offensive or hateful, is this: freedom of expression leads to political and moral progress much more effectively than censorship does. Look at it like this. Everyone agrees that good ideas should be accepted and bad ideas should be rejected. What people sometimes disagree about is how bad ideas should be eliminated. One method of eliminating bad ideas is through government censorship (i.e. through force). A second option though is for bad ideas to be eliminated by losing out in a competition with good ideas. The first method puts the power in the hands of a supposedly "benevolent" government while the second method is rooted in the view that, in the long run, people can sort out the truth for themselves through open dialogue and debate.

The Framers of the U.S. Constitution came down squarely in favor of the second option, rejecting the conception of government as a benevolent parent who tells his/her children what to think and what to say. Nor has the United States Supreme Court (USSC) equivocated on this matter. The high court has made clear its support for the Framers' vision that the U.S. government is one that preserves the free exchange of ideas and does not engage in censorship. This vision was famously and most powerfully expressed by the great USSC Justice Oliver Wendell Holmes in his dissenting opinion in Abrams vs the United States. It was here that he introduced one of the deepest and most enduring images in American legal history: the marketplace of ideas. He articulated the vision that, while censorship is perfectly natural, the far superior way for a valuable thought to gain acceptance is "the power of the thought to get itself accepted in the competition of the market." "That at any rate," he continued, "is the theory of our Constitution."

"But isn't hate speech legally banned on campuses?" you might ask. Surprisingly, the answer is no. The USSC has held that even neo-Nazis and members of the KKK have the First Amendment right to advocate their views in our society [Brandenburg v Ohio, 1969]; and courts have further held that people legally on a college campus enjoy the same robust free speech rights as those in society at large. [Sweezy v New Hampshire, 1957; Healy v James, 1972] This means that racist hate speech cannot legally be banned on college campuses simply because of its content. There is no hate speech exception to freedom of speech in the United States of America.

Though this might initially seem like a mistake, the First Amendment protects offensive speech for good reason. Sometimes those who passionately cling to the prevailing ideas of their culture need to be offended. In the antebellum South the speech coming from abolitionists (such as calling slave owners "oppressors") was certainly deemed hateful, offensive, and untrue by most of the people in the South at that time. But this is exactly the kind of speech that the First Amendment is intended to protect. Speech that offends the vast majority of the population is exactly what is often required to bring about moral and political progress. At one point in time it might have offended most people to hear that women should be allowed to work outside the home, or that homosexuals ought to have the right to marry; but, because of the First Amendment, these ideas could not be labeled "offensive hate speech" and banned. So we see that, over time, sometimes ideas that were once offensive later become accepted moral truth. Thus, history has confirmed the Framers' view that allowing those in power to prohibit ideas simply because they find them offensive is an impediment to progress. Instead, our Constitution allows currently offensive ideas to enter the marketplace and trusts that either (a) the people will eliminate them through advocacy if the ideas truly are misguided or (b) the ideas will eventually come to be accepted because they are correct.

Although the Framers and the courts have made it clear for over two centuries that the First Amendment requires a marketplace of ideas and not censorship, several colleges and universities in California have nonetheless attempted to prevent discriminatory speech from entering the marketplace by adopting speech codes. These codes, though, have consistently been ruled unconstitutional by the courts. Stanford University's illegal speech code prohibited all speech “intended to insult or stigmatize an individual . . . on the basis of their sex, race, color, handicap, religion, sexual orientation, or national and ethnic origin." [Corry v Leland Stanford Junior University, 1995] While undoubtedly well intentioned, those who adopt these codes are engaging in censorship rather than adhering to our Framers' vision of free and open debate. Again, all agree that bad ideas ought to be rejected. The question is, how? Do we eliminate them by trusting the "benevolent" rulers who are not always benevolent, or do we let the people figure it out through dialogue and debate? Keep in mind that what is offensive today may well be moral truth tomorrow; and even if we do outlaw bad offensive speech today, we will also be empowering the government to outlaw good offensive speech tomorrow. Sarah Palin and the Tea Party might get elected and ban all arguments in favor of Obamacare by labeling them offensive and un-American hate speech. Or a bunch of far left liberals might prevent me from publishing this article because it doesn't meet their standards of political correctness. The marketplace is better than censorship; that, at any rate, is the theory of our Constitution. There are many people around the world today attempting to spread their beliefs through force, and I am happy to help preserve a system of government that adheres to the opposite vision. I hope you are too.

It is disappointing to see that many institutions of higher learning (such as Stanford in the Corry case) are teaching their students to censor speech rather than refute it once it's in the marketplace. I hope GCC will not join this ignominious club. In years past there was an intolerant group of extremist "Christians" at GCC wearing signs that read "atheists, Jews, faggots, and Catholics are all going to burn in hell." Their speech may have been offensive (I happen to be atheist, married to a Jew, have loved some faggots, and come from a Catholic family), but I strongly hope we never kicked them off of campus simply because we didn't like what they were saying. This would have been a violation of their right to engage in political speech. It would also have been a disservice to our students. I teach a class that covers Christianity and I teach my students to think critically. This group provided a great opportunity to do both; and, thus, better prepare my students to deal with hateful speech when they leave campus and reenter society at large.

To say that we at GCC should protect freedom of expression (even offensive political expression) is not to say that we should defend all speech and print on our campus. Not all speech is protected by the First Amendment, and unprotected speech often should be prohibited. One type of speech that is not protected by the First Amendment is harassment. Some people think that when they are deeply offended they are being illegally harassed, but this isn't true. Racist and anti-Semitic speech does not constitute harassment of all blacks and Jews (Brandenburg) even on a college campus (Healy). To amount to unprotected harassment, speech must be far more than merely offensive or hateful. For example, if an individual man were to follow an individual woman to class on a regular basis and make unwelcome comments that were so severe and persistent that the victim's grades suffered, this would be discriminatory harassment. [Davis v Monroe] Note the differences between this and mere offensiveness. In the Davis case the speech was directed at an individual, while the Klan member in Brandenburg was speaking about whole races, religions, and ethnicities. Note also that the unwelcome speech in the harassment case was persistent and severe (so severe that the victim's grades suffered). Note also that the unprotected speech in the Davis case was not political speech (speech about government action or about how society should be organized). The Klan member in Brandenburg, on the other hand, was engaged in (offensive) political speech, which is entitled to much greater First Amendment protection than speech that has no political purpose.

At GCC then we have an obligation to both (a) protect individuals' right to freedom of expression (even if the expression is offensive political speech) and (b) to prohibit speech that constitutes harassment. The flyer that appeared on campus last week presented us with a challenge in this regard. Was the flyer offensive but protected political expression, or did it rise to the level of harassment? The Brandenburg and Davis cases indicate that it was protected by the First Amendment. It was not directed at an individual; it was not persistent and so severe that someone's grades suffered; and it was political speech. These are the characteristics of offensive but protected political expression, not harassment. In future cases similar to this one, I believe we at GCC should presume the expression is protected by the First Amendment, since it usually is. If an expert in First Amendment law tells us that it is not protected, then we should put a stop to it. Otherwise, we should not interfere with it but should, of course, defeat it in the GCC marketplace of ideas by speaking eloquently against it both in and outside of class.

Defending freedom of speech is at times an extremely difficult task, but it's also a worthy one because human dignity and autonomy cannot be fully respected without it. As Thurgood Marshall once put it, "The First Amendment serves not only the needs of the polity but also those of the human spirit; a spirit that demands self-expression."