History, Milestones, and a Banner Year for GCC Nursing Program 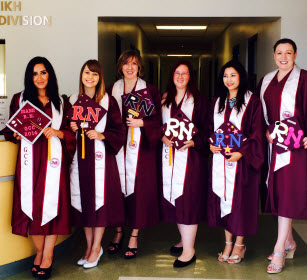 Since the 1950’s, GCC Nursing program graduates, adorned in their scrubs and white coats, have served their communities’ healthcare needs with care and commitment. This tradition continues with the most recent graduating class of June 2014. According to Emelyn A. Judge, R.N., M.N., and Associate Dean of Health Sciences at GCC, “Every semester, in our nursing program, approximately 40 students graduate, which adds up to about 80 students per year. It is exciting to report that the students in the class of June 2014 have achieved a 100% pass rate, on their first attempt, on the California Board of Registered Nursing licensure exam. We are well above their set benchmark of 75%. This is particularly impressive because the format of the licensure exam was altered in April 2013, increasing the level of difficulty.”

Patricia Djambazian, GCC Nursing Academic Counselor, shares this story from one of her students: “…her grandmother raised her and every day, after school, she would go to the senior residential facility and read to the residents, as her grandmother, a Certified Nurse Assistant (CNA), worked her rounds. Later, she followed in her grandmother’s footsteps and volunteered at the same facility for many years.” These experiences helped her to determine her career of choice as a Registered Nurse. She has excelled in her nursing courses, maintaining a 4.0 GPA; she is currently one of our nursing students in the first cohort at CSULA’s RN-BSN Collaborative.

Throughout the years, the GCC Nursing program has evolved. In the 1950’s – the time when Henrietta Lacks’s cancer cells were successfully cultured, which led to the creation of the polio vaccine in the same decade, our program began as a Licensed Vocational Nursing (LVN) program. As the positive effects of this new discovery were witnessed by nurses all over the country, and as the polio vaccine began to be administered to patients, the GCC LVN program continued to progress. In the 1980’s, due to new nursing regulations, a shortage of nurses, and a variety of patients’ needs, the program transitioned from a LVN program to the Career Ladder LVN-RN program. Soon thereafter, due to changes in healthcare, GCC established the current Registered Nursing program.

The new developments outlined below are both noteworthy and serve as a testament that the GCC Nursing Program faculty, administrators, staff, and all other constituencies involved, are not only cognizant of the shifting dynamics of the nursing industry, but are willing to take the necessary steps to adjust the program in order to better serve nursing students and prepare them to serve their communities.
2014 Nursing Program Updates:

The GCC Nursing Program invites you to come tour the program’s Nursing Resource Lab and classrooms at any time. For more information, contact the GCC Nursing program at glendale.edu/nursing or at (818) 551-5270.