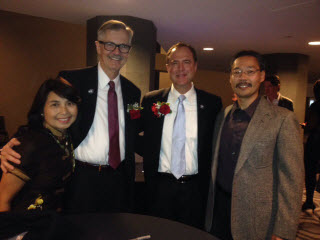 In October 2014, Michael Moreau was chosen as the Democrat Of The Year in State Assembly District 41, Pasadena. He was honored by Congressman Adam Schiff for serving four terms on the Party Central Committee and as a convention delegate. He also served three consecutive terms as president of Democrats of the Pasadena Foothills, provided several years of service on the steering committee of the United Democratic Headquarters in Pasadena, and belongs to one of the state's largest and most successful campaign organizations. Michael was honored at the Los Angeles County Democratic Party recognition dinner on Sunday, October 19.  We captured a photo of Michael at the recognition dinner with his wife, Florence (to his left), and Congressman Adam Schiff and Richard Kamei (to his right).

There was a brunch in support of Sheila Kuehl (County Supervisor). Many of our members live in the west side and valley areas, and Sheila made herself available to discuss important issues related to those geographic areas. Congressman Brad Sherman and City Council member Bob Blumenfield sponsored this event. The California Federation of Teachers (CFT) supports Sheila Kuehl for Supervisor.

With elections coming up in November, CFT endorses Jerry Brown and Tom Torlakson in the Primary. As stated by CFT, both politicians support unions, and were both instrumental in the passing of Proposition 30 which helped decrease the high number of lay offs during the recession. Proposition 30 raised additional revenue for schools and helped shape a historic funding bill for students from low-income families, who need additional resources to excel. Torlakson also has a positive reputation of supporting public education. He supported community college instructors with fighting against unfair practices of the Accrediting Commission of Community Colleges.