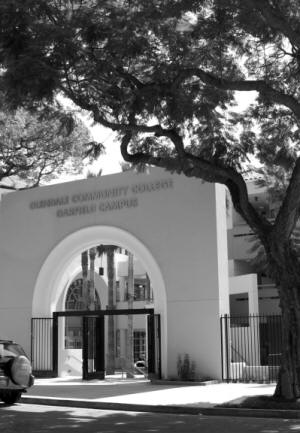 I would like to take this opportunity to welcome the new chair of the Noncredit ESL Division, Deborah Robiglio. As many of you may have noticed the poster images of Debbie on campus as well as seen her face flitting across the screen of our GCC Webpage, Debbie Robiglio was already a relatively famous person on campus before accepting the position as the Noncredit ESL Division chair. She became a prominent figure on campus when she was named a Fulbright Scholar for the 2012-2013 academic year.

A little background about Debbie: She was raised in Southern California and is a first-generation American citizen, with parents from Argentina, so it is not surprising to note that she spoke English at school and Spanish at home while growing up. After high school, Debbie went to UC Santa Barbara for undergrad and received a BA in communications and then went on to become a journalist at a paper in North Carolina. Her articles were mostly related to education and she found herself drawn to that field. Later, she moved to Las Vegas with her parents and began substitute teaching while working on her master's degree at the University of Nevada. After finishing school, Debbie accepted a job with Long Beach Unified and LA Unified School Districts where she taught as a dual-language instructor for six years. It was ten years ago, in 2004, when Debbie first accepted a position with us at Glendale Community College as an adjunct Noncredit ESL Instructor at Garfield. Then, within one year, she was hired as a full-time instructor!

Now, after nine years working full-time at GCC, and with her Fulbright research completed, she is ready to take on the duties of Noncredit ESL Division Chair. As Debbie was quoted in the Glendale News Press saying, "I am always looking forward to doing something new." So to that, I say, welcome Debbie Robiglio. We are looking forward to working with you and supporting you as our new Division chair. So far, it seems like the chair fits.

The biographical information was summarized from the Glendale News Press: http://articles.glendalenewspress.com/2012-03-12/news/tn-gnp-0313-glendale-community-college-professor-deborah-robiglio-awarded-fulbright_1_garfield-campus-fulbright-scholar-english