A review of Rachel Carson and Her Sisters, Extraordinary Women Who Have Shaped America’s Environment, by Robert K Musil (Rutgers University Press, 2014). 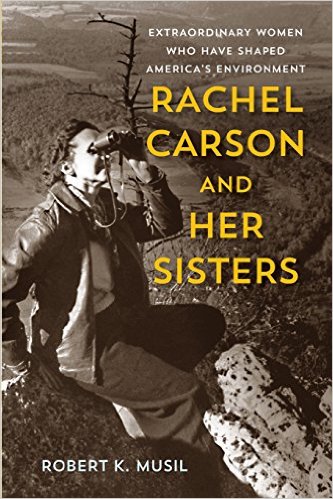 Many of us already know Rachel Carson and her importance to the environmental movement. Best known for her book Silent Spring, Carson revealed that DDT was detrimental not just to mosquitoes, but to  birds and the ecological systems of the earth. What would our lives be like if there were no birds singing because they ate insects sprayed with chemical to kill the bugs the birds ate. She also wrote The Sea Around Us which explored the ecology of the oceans. For revealing the ways in which the degradation of the environment poses threats to life on earth, she gets credit for founding the modern environmental movement. But the effort to protect the environment did not begin with Rachel Carson.

Robert K. Musil, in his book Rachel Carson and Her Sisters, Extraordinary Women Who Have Shaped America’s Environment introduces us to Rachel’s “sisters” to show us that Carson’s work represents the middle of the story. A small but significant number of women in the nineteenth century also wanted to protect the environment. The first of Rachel’s “sisters,” was Susan Fennimore Cooper who was the daughter of James Fennimore Cooper, famous for his books The Leatherstocking Tales, including The Last of the Mohicans. While a few may know James from a high school literature or history class, his daughter, Susan, is rarely mentioned. We learn from Musil that Susan was fascinated by rural life—its flora and fauna— and she wrote extensively, raising awareness of the delicate balance of the earth’s ecological systems.

Florence Bailey, horrified by the use of elegant feathers taken from exotic birds to decorate the hats of rich women, not only campaigned to convince women stop buying those expensive hats, but created the Audubon Society so that future generations would understand the importance of birds.  Other women studied trees, bugs, and fleas to show that these life forms are all part of the ecological system that needs to be admired and protected. That awareness continued as women continue to pass on sensitivity to the environment from one generation of women to the next—all the way down to Rachel Carson.

Musil also shows us that Carson and these women are also noteworthy for their daring challenges to the ideology that assigned women to the domestic sphere and gave men control of the public. Well into the twentieth century the study of flora and fauna were considered men’s domain, but step by step, after considerable struggle, Rachel’s sisters found niches in the world of science. Cooper managed to publish in the Naturalist in the United States. Other women wrote children’s literature or published in women’s magazines. While their place in the public domain was limited, they passed concern for the environment to their children and their children’s children. Their message: we must appreciate the beautiful earth. Their efforts have been labeled “aesthetic environmentalism.”

Breaking barriers into the world of science was not these women’s only accomplishment. Musil reveals political lessons learned. Women were not supposed to have a public voice. But they refused to be silenced and used their ingenuity to shape policy. Marjorie Spock, sister of Dr. Benjamin Spock was intensely aware of Rachel’s work on the threats that DDT posed to the environment, and she knew how important it was to get this story to the President and Congress before Monsanto, the chemical industry giant, saw it. Working in the shadows of her brother, Marjorie used her knowledge of the political scene in Washington to get Carson’s Silent Spring to the Washington. Wining and dining key figures in Washington DC, Marjorie and Rachel convinced key congressmen and John Kennedy to review the book before the publisher released it. Impressed by the data, Congress passed the Endangered Species Act in 1966, making the sale of DDT illegal in the United States. Step by step, Musil shows how a small number of women managed to outmaneuver giant and powerful industries and orchestrate policy on environmental issues. This shift to legislation represented the critical shift from aesthetic environmentalism to policy environmentalism and Rachel and her sisters were at the center of it all.