The latest salary offer from the District proposed that the 2.75% portion of the 4.5% raise for full-time faculty, and 5.5% raise for adjunct faculty, set to expire in July not be extended, and additionally countered with 0% for 2016-17 and 0% for 2017-18.  This would effectively make the raises for the 2015-18 collective bargaining agreement only 1.75% for full-time faculty and 2.75% for adjuncts over three years.

In response to this offer, the Glendale College Guild mobilized faculty to attend the Board of Trustees meeting on April 19, 2016 at Garfield Campus wearing blue. In addition to faculty, we also had students, classified staff, and even some administrators in blue (it may have been a coincidence, but we’d like to think it was in show of support)!

Many thanks to all of you who attended, as well as to those of you who were there in spirit.  Also thanks to our Superintendent/President, Dr. David Viar, who was instrumental in helping us have a safe and successful event.

As I looked at the sea of blue in the overfilled community room where the Board of Trustees’ meeting was taking place, I felt the strength in our numbers. It was great having a visual demonstration of all the people our union represents.  With my fellow faculty and supporters all around me, this is what I delivered as the Guild report to the Board: 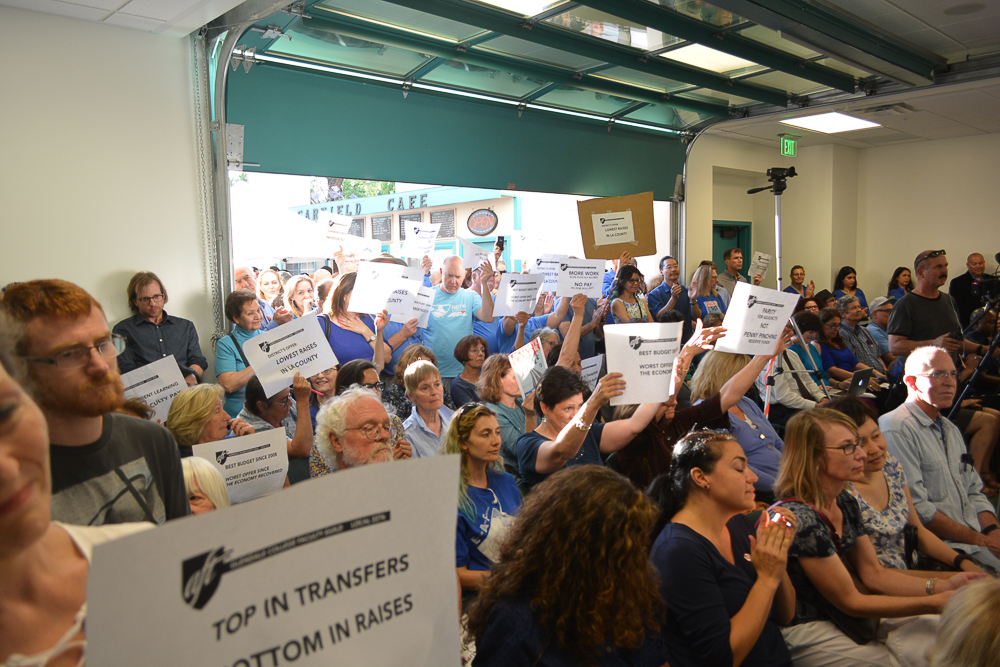 Just last month, the California State University administration was claiming that their budget would not allow for faculty pay increases, yet less than 2 weeks ago CSU Faculty were able to reach a tentative agreement for a salary increase totaling 10.5% over a 3 year period - a FAIR and AFFORDABLE pay increase to make up for the lost purchasing power faculty have incurred since the Great Recession of 2008.

Now that the budget is healthy, the money is there to support a similar salary increase for Glendale College’s faculty, who make this a premier Community College District. How are we to attract and retain premier faculty when other districts are working toward restoring faculty salaries, and when at the same time, Glendale College District is planning on falling further and further behind? We are now operating under a contract that expired 9 months ago.  This is unacceptable.

We - the faculty - have proven time and time again that we step up during hard financial times to help the college make ends meet, including voluntary pay cuts if that is what is needed. But now that the money is flowing into the system, it is time for the District to step up!  The Trustees must make the decision to make GCC faculty and GCC students a priority by offering a salary proposal that is FAIR AND AFFORDABLE.