Garfield Gleanings: What is the news around Garfield?

What is the news around Garfield? Well, many things have been going on since the start of the year but perhaps none more compelling than the amazing turn out in attendance at the Board of Trustees meeting on Tuesday April 19th! Over 150 faculty and at least 50 students OCCUPIED the Board meeting wearing BLUE and holding signs in support of fair compensation for instructors. At the beginning of the meeting, confusion abounded as efforts were made to accommodate the number of attendees. It quickly became clear that the garage door at the back of the Mariposa Community room needed to be opened in order for the overflow of participants to be able to listen in. However, time passed and all standing outside and in the halls began to notice that we were not going to be let in. To that, one faculty member decided to start a wave of steady clapping that quickly led to the garage door being opened! A small reminder of the importance of making your stance loud and clear in order to get things moving! Other than that, we were relatively quiet with only a few opportune moments for applause and boos as was necessitated by the comments of the speakers.

One speaker that is very relevant to our Garfield Gleanings page was our fellow Noncredit faculty member Cindy Pollack who teaches in Noncredit Business and is our Adjunct Representative on the Academic Senate. She spoke from the heart of her love of teaching in Noncredit and of the many years and hours she has spent working at GCC. She also spoke of how hard the various cuts we’ve taken as faculty over the past 7+ years have hit us at Garfield. [Most notably, Garfield faculty were hurt by the cutting back of our Summer and Winter classes to almost nothing for two years. Once the budget improved a little, a partial version of our past Intersession programs have been reinstated but not to the degree it was before 2008]. Also, Ms. Pollack spoke of how her hours were personally cut back and how she has felt the real life consequences of these cuts, like the loss of her home…to which one man held a homemade sign that read something to the effect that PAY CUTS = HOMELESS! We cheered Ms. Pollock on and stayed around to shake her hand afterwards. I’d like to take this opportunity to thank Ms. Pollock for her courage in representing us at Garfield! Thank you! 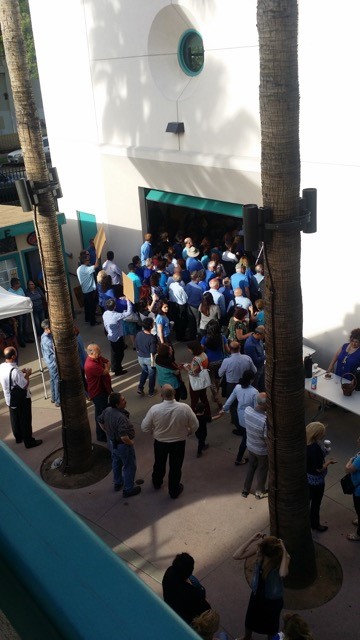 Some may be reading this a little behind the ball and wondering what on earth I am talking about. I understand that the majority of Garfield faculty are adjuncts and fly around the city working from school to school to make ends meet. For that reason, some may not have had a chance to read the emails or pay close attention to what has been going on. I will attempt to give you a recap: Your faculty union requested that the Glendale Community College District allow us to keep our 5.5% raise for part-time faculty and our 4.5% raise for full-timers, to which the District replied, NO. They would rather let 2.75% portion of our raise expire on July 1st (leaving us with just 2.75% for adjuncts and 1.75% for full-timers ongoing) despite having more than enough money in the coffers to cover it! To add insult to injury, the District decided to announce in their counter to our faculty union that we are to receive a 0% raise next year and 0% raise the year after that!

In the past, your union has negotiated to make such cuts because we knew they were struggling financially and we were willing to be team players. However, this time around, they have more money than they have had in years along with a savings reserve of 10% (when GCC policy is to strive for 5%). Your faculty union leadership, with the unanimous support of your fellow faculty, have decided to stand up together to say that we DO NOT DESERVE A PAY REDUCTION!

So, the question is, did our OCCUPY the Board of Trustees Meeting have any effect on negotiations? Well, at the very least, we made it clear that it is not going to be possible to ignore us! Of course, some rumors have already come back to the faculty that the District felt our OCCUPY movement was too early as they still have not heard what next year’s budget will be, but to that, we reply: What does that have to do with RIGHT NOW? Our 5.5/4.5% raise is what we have NOW and YOU HAVE THE MONEY to keep it ongoing RIGHT NOW!

What does our current raise for 2015-2016 have to do with next year? The answer may be that we are not growing as a college and therefore we should prepare for the worst, i.e., save our money just in case. Our response is clear: #1 Garfield IS GROWING and, #2 the lack of growth in credit was strategic on the part of the District. They cut back course offerings in an attempt to purposefully go into decline. If they chose not to grow, why is that something we must suffer for? Further, even though efforts were made to go into decline, it didn’t work at Garfield. In fact, our morning and evening ESL classes are overflowing at the seams! A clear example would be my own class of which more than 100+ students tried to add! I have laryngitis as I write this piece from spending hours and hours in the classroom trying to get my voice to reach so many students! We cannot let this slide! We must work together to ensure our rights by being involved and by making our presence known.

On that note, thank you to all of you at Garfield who pulled everything together to be at Board meeting this week! This will most likely not be the last time you are called upon to stand together with your fellow faculty to avoid being gauged of your pay. Please don’t lose heart! Our efforts will definitely pay off in the end so long as we don’t give up and we don’t give in!