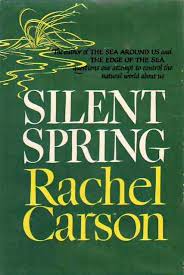 Chapter 7 of Merchants of Doubt (the GCC One Book choice this year), by Erik M. Conway is titled “Denial Rides Again: The Revisionist Attack on Rachel Carson” and this chapter is about modern day posthumous attacks on the environmentalist Rachel Carson. Conway mentions that Rachel Carson was an American heroine who exposed the harms of DDT in her book, Silent Spring. This fueled my curiosity and I had to see for myself what her book was about. To the surprise of my librarian, I was not the only person inquiring about a book published in 1960. A quick check revealed it was indeed popular and was borrowed just last week, which shows that the American public is still interested in what she has to say.

I was interested in her language. Her modern day attackers have compared her to Stalin, and Hitler, and have accused her book of having a hysterical tone. I wanted to check for myself if the book was hysterical in tone. I wanted to see why this book was so popular at the time that the contents of it brought about such a public outcry that regulations were passed to limit the use of pesticides in crop production.

The language is clear yet lyrical and poetic. I did not find the tone hysterical, in fact, the opposite. I found her tone very rational. Her book is full of factual information about different toxins and its effects. She does not present these effects in a strident voice, even though the effects are gruesome but one that is calm, yet stating what the effects are. The effects of each toxin is researched but not presented in scientific terms, but more as anecdotes of what they do to wildlife, to out earth, and to the humans that occupy the land. Her language is descriptive, rhythmic, and visual, yet simple and very understandable.

I tell my students when presenting a research report, it is important to present facts, but also to present them with anecdotal and descriptive language so that the research paper consists of not only boring factual information but also information about which the reader can see relevance. This book is the perfect juxtaposition of facts with emotion This book is an example of how to successfully win an argument without yelling- what I teach in my English 101 and 104 classes.

After reading the book, I can see why she was sued by the $300,000,000 pharmaceutical industry that produced over 500 toxins that year. Her book was an expose of the effects of their chemicals on the earth. America’s free market capitalist approach allowed these chemical industries to reap profits on the backs of an unsuspecting public.  The chemical industry lost because her facts were well researched and true; thereafter, regulations were passed in 1972 to limit the use of pesticides.

Carson did not live to see the passing of this law because she died of cancer, probably caused by exposure to pesticides. Cancer is still rampant among our people. The 2015 book, Merchants of Doubt exposes that all kinds of pollutants are still being caused by industry, and our government needs to step in to protect the people. Watching the GOP debates, I hear the cry again and again for the dissolution of the Environmental Protection Agency. I live in a world afraid that government is controlled by Big Business and is not there to protect the American public. We need more writers like Rachel Carson to stand up and expose the pollutions happening in their communities. It took courage to write what she did. She knew she was up against a rich, powerful enemy, yet she wielded her pen and won. It reaffirms my view that the pen is more powerful than the sword. We need more books like hers, stating the effects happening around our country by Big Business because our earth is still being polluted by companies that care more about their profits than people.