Joseph “Joe” Marlow Keefe (19 Jan. 1942 – 26 Apr. 2001) was a Biology professor at Glendale Community College (GCC) from 1975 to 2001. In the 1970s, Joe’s thesis on the taxonomy of peonies earned him a master's degree in Biology from UC Santa Barbara. During his long and successful tenure at GCC, Joe taught biology to blind and disabled students. According to one of his previous biology student, Ronald L. Clark, he and Joe went looking for objects that would imitate the biconcave discoid structure of red blood cells, allowing blind students to mentally visualize the shape of red blood cells by feeling the objects. Joe and his students worked to beautify the hillsides north of the GCC campus. Being a botanist, Joe also amassed a large collection of plant vouchers at GCC, and curated the collection. His collection includes specimens collected from Central and South America. Joe organized this collection based on his own system (not widely used in professional herbaria). Upon his death in 2001, the collection lost its caretaker.

I studied biological sciences at GCC, and later transferred to California State University Northridge (CSUN), and studied biology. My love for botany became evident when I took Biology 101 and 102 at GCC, and it flourished when I took general botany at CSUN. After this course, a hail of botanical courses followed, especially flowering plant systematic, and plants and animals of Southern California, solidifying my love for plant identification and classification. I also have high regards for plant ecology. After graduation, I returned to GCC in the summer of 2012, and stumbled upon the plant collection and learned about Joe and his work. The cabinet doors, which housed the collection, were unlocked, and the cabinets were infested with beetles, which had destroyed most of the collection. Joe's personal system, which was also taxonomically out-of-date, made the task of locating a specimen difficult. Although I had previously worked inside the CSUN herbarium, I never had the chance to design and curate an herbarium from scratch. Thus, wanting to put my knowledge to practice and, at the same time, save Joe’s work from annihilation, I pitched the idea to the Biology department at GCC in early August of 2012, and went to work on writing a protocol that would outline my design and how the herbarium was to be curated. 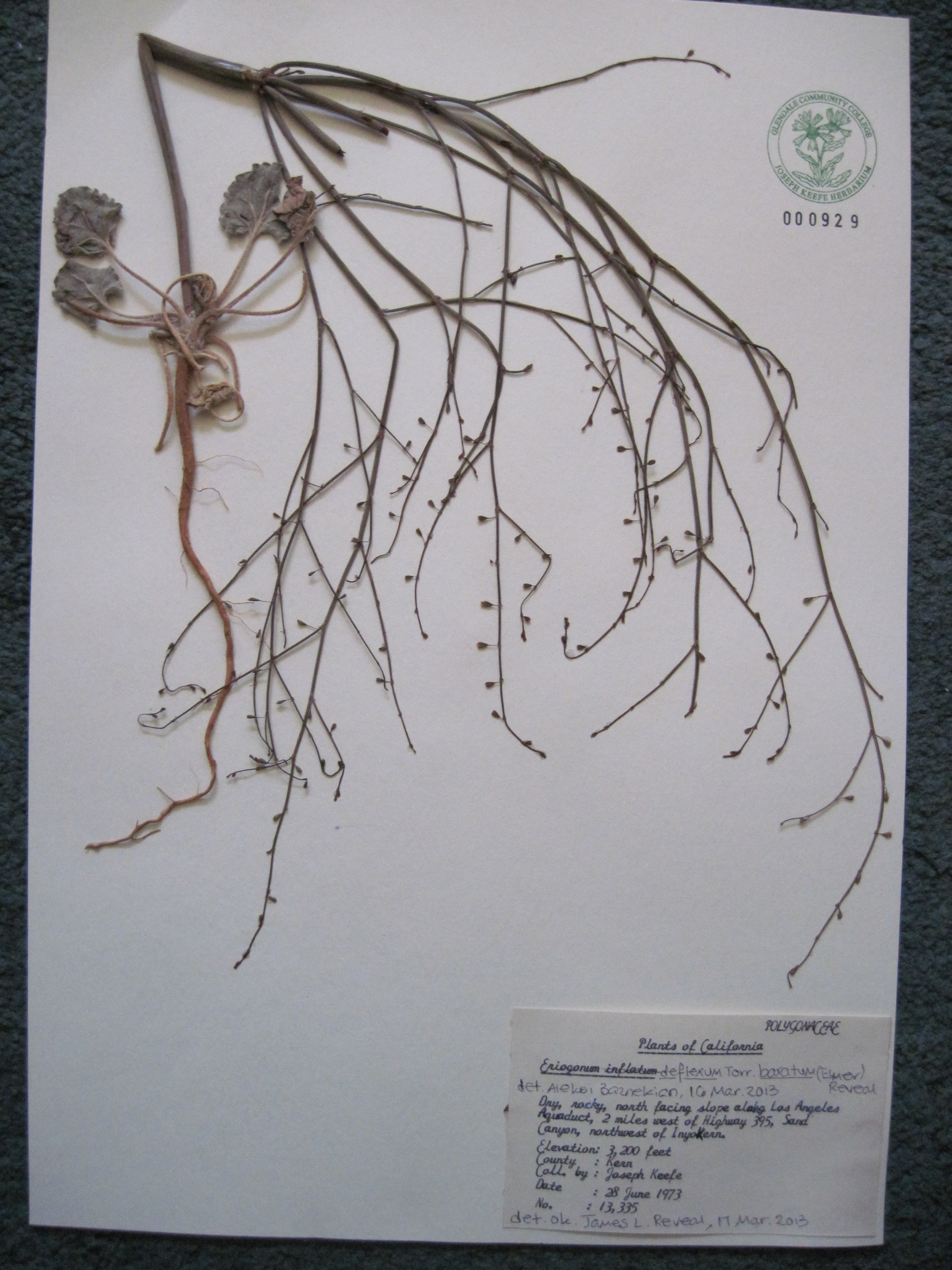 In early September of 2012, I was notified that the GAUSS Grant was ready to fund the herbarium project. By this time, my protocol was ratified by the Biology department, and I had compiled a list of necessary equipment. In addition, I designed multiple herbarium seals, and multiple voucher labels. While I waited for the parts to arrive, I cleaned and sanitized both the inside and outside of the herbarium cabinets, and froze the plant vouchers to eliminate any living beetle larvae and adults. Within less than few days, I sorted through nearly 1600 plant vouchers, and separated the damaged vouchers from usable vouchers. The damaged vouchers were discarded after they were all fully photographed. Once the equipment arrived, I set out to design the herbarium based on my protocol. The new herbarium was to be named after Joe. All vouchers were marked with the new approved herbarium seal and previously absent accession numbers.

I used the family card system (widely used by professional herbaria) to organize the herbarium cabinets. I introduced species folders, and carefully pasted labels for all folders, including the genus folders, and family card. Cabinet doors were labeled, keys were ordered to lock the doors, and I created an Excel file, where I entered the data from voucher labels into the sheet.

I wanted to finish the herbarium as soon as possible in order to do other things with it, such as digitizing it (putting digital photos of vouchers on the Biology department’s website), registering the herbarium with CCH (Consortium of California Herbaria), and even using it to bring back botany courses to GCC! 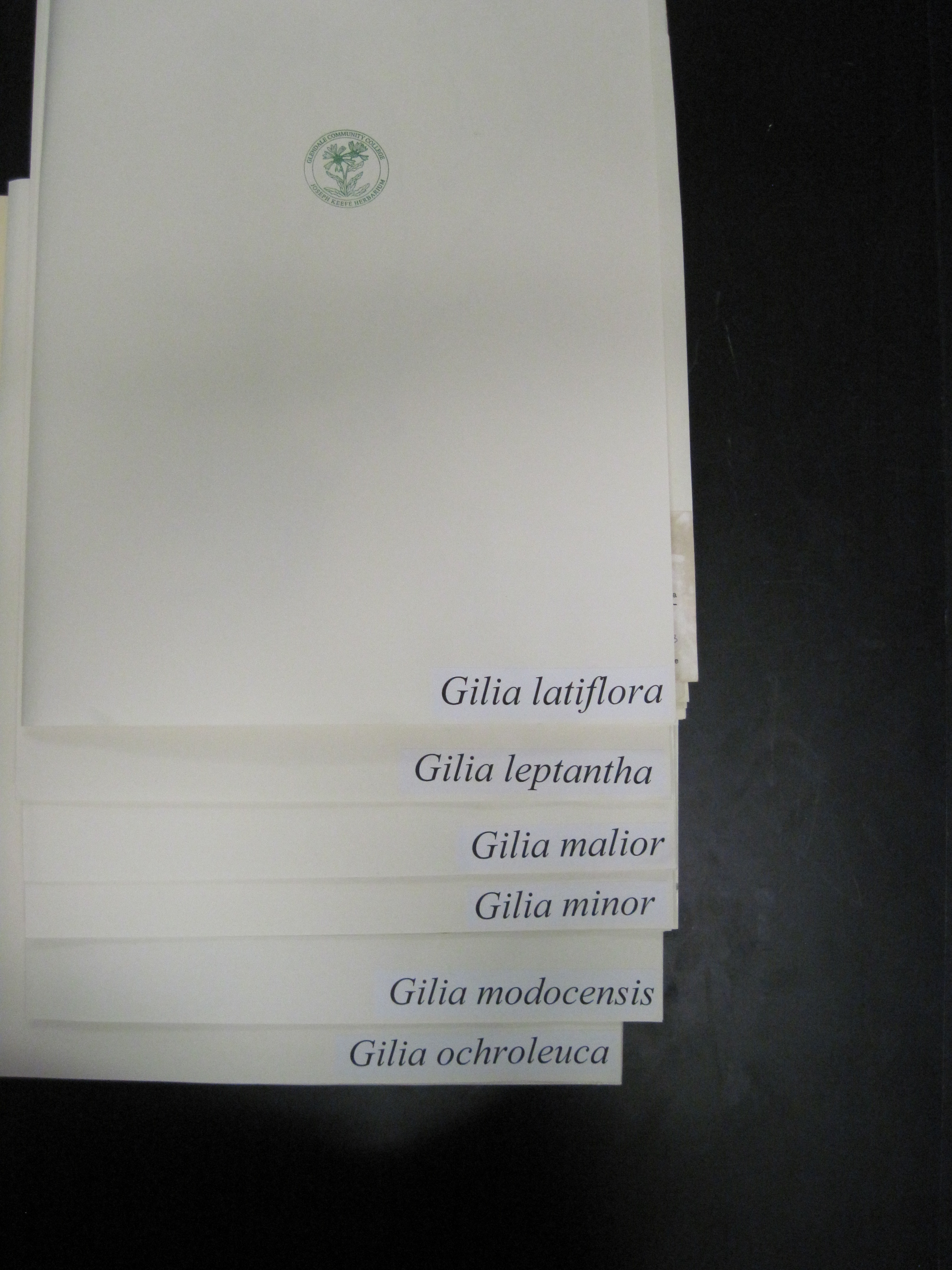 In the meanwhile, in the spring semester of 2013, Biology 102 students were given the chance to receive some extra credit points, where they would have to collect and identify one plant specimen (using the Jepson Manual), collect necessary and scientifically useful data about it, preserve it and make it into an herbarium quality voucher. The keying was the toughest part, since using the Jepson Manual is daunting enough for seasoned university students taking upper division courses, let alone college students barely beginning their biology career.

Once I finished designing the herbarium, I put it to the test. If a student, instructor, or concerned citizen comes to the herbarium with a plant specimen whose species is known, or roughly identified, and they want to use the herbarium voucher for teaching or as a reference, first, I would check the Excel spreadsheet to see if we had a voucher of the species, and if we did, go to the correct herbarium cabinet (using the door labels) and find the voucher in that cabinet. The whole process takes no longer than 30 seconds!

The Joseph Keefe Herbarium houses 929 vouchers, with 575 species representing 140 families. Two vouchers, one of Eriogonum rixfordii and the other, Juniperus californica, are instrumental in teaching us something new about the natural history of these species. 91.3% of the vouchers are of flowering plants, and Joe’s collection makes up 43.5% of the total collection (404 vouchers). 83.6% of the specimens were collected from within California. These stats are part of a larger group of statistics compiled by myself at the end of the project.

I was able to contact and convince the CCH director to allow GCC to add data from our collection into CCH’s larger database. I believe only one other community college has had the chance to contribute to CCH.

The CSUN curator, Dr. James N. Hogue, came to inspect the herbarium once it was completed, and wrote a wonderful review about it. The GCC Biology department staff and faculty also toured and inspected the herbarium. In my opinion, it is the finest and most perfect herbarium in southern California, being merely overshadowed by other herbaria due to their large collection sizes.