by Peter Stathis and Julie Gamberg 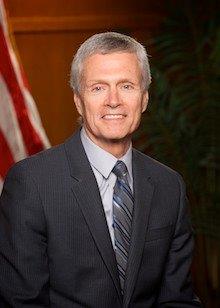 It should have been a dark, ominous day where the clouds themselves gave notice of hidden demons.  After all, we were out to unmask the masquerader, to get to the bottom of the man of mystery, to lay bare the soul of the one we call Superintendent-President.  Small town Illinois.  Pop. 3500.  Dad the football coach.    Come on.  Do you buy that?  We certainly didn’t.  At least, not at first.

But it wasn’t a dark, ominous day.  There weren’t any clouds.  It was clear, not too hot with a pleasant breeze blowing.  And who was guarding his door?  Was it a gargoyle perhaps?  Not really.  It was Sally Holmes.  Practically the nicest person in the world.  Wait a minute.  Maybe he had hypnotized her.  Stepford wife kind of a thing.  But no, same sweet Sally.  “He will be here in a minute.  He went to catch a bit of the Social Science lecture on shifting demographics.  It’s really nice to see you.”  What?!  An SP going to an on-campus talk.  What’s he trying to prove?

So he pops in, all apologetic like.  Yeah, sure.  He got caught up in the lecture.  As if a college president would be interested in something academic.  So, we started digging.  Dad, a Vince Lombardi type?  Viar learned to play through the pain?  Win at any cost?  “Played football in Junior High through freshman year.  But when I got to my sophomore year in high school my father pulled me aside one day and told me not to play just because he was the coach.  He told me if I was more interested in swimming and water sports, which it seems I was, then that is what I should do.”  A few years later, (we saw on his shelf), he made All American in water polo as a goalie.  “They needed a token Mid-Westerner.  Everyone else was from California.”  It’s a lesson that Dr. Viar has tried to pass onto other parents.  “Identify what your children like and try to nurture that.  Don’t expect them to do what you like.”

Okay, so he has a good cover story.  But check out his office.  There was something removed from the walls.  The sconces, maybe.  Something is going on.  Was he thinking of putting in a wall safe? Cameras? Was that it?  “I had them removed [because] I want faculty and student art put up here… Probably many of our students have come from backgrounds where they have not been exposed [to art and music].  College was where I found the appreciation …”  Okay, but don’t they put wall safes behind artwork?  And hadn’t one of our recent former presidents spent a lot of time shopping for those sconces?

So, we couldn’t trip him up on the personal history or the décor.  But what about the division chair structure?  That ought to bring out his inner Mussolini.  “I come from a different experience where many of the functions of our division chairs are done by deans.   But I am not going to come in here and shake things up.  It’s served this college well for a long time. Any change would have to come through the faculty.” Where is Il Duce when you need him? “The ability to be the benign dictator does have its attractiveness at times, but if that’s the kind of role I wanted to have, I learned a long time ago, I should not be in a higher education institution, and certainly not in California community colleges. I enjoy being a CEO where shared governance is key.”

But what about flexing some muscle on key issues? What about knocking one out of the park? “If you establish the relationships, and you have a process in place, and there is a general level of respect, when there are times you absolutely need to move quickly, you [can] draw on all of that,” he explained. Sounds reasonable. But what about those who won’t “play ball,” we wondered? “We have a number of governance committees already in place … I’m not here to come in and reject the structure for working issues through to a resolution … this is the strength of GCC … and yes, there are times when it has not worked as well as people would like it to, but that’s true of any structure.” Wait! Do we sense avoidance? Is he waiting to be walked? He admits to having a few secret plays for working with embattled positions and constituencies, but says that his biggest weapon of all is patience. “My experience over the years has been that patience pays off. There is very little that has to be done right now … you can take a little more time, analyze more thoroughly, educate a few more people and take a step to get a little bit closer.”

We’ve heard rumor of another secret weapon though, so we ask bluntly what it is. “Listening.” Listening? Viar contends that what is often mistaken for a lack of caring is simply poor or missing information. “Maybe this person doesn’t understand how the federal laws are affecting this and why these rules exist, so what you’re proposing isn’t going to work. Part of listening is trying to find the common interests [and] where information is not fully there. Is there a kernel of something where everyone is in agreement? Push out from there.” He admits, however, “sometimes that common kernel is not adequate for us to move this college forward,” in which case he advocates working with key decision makers to affect change. “What is the body, the group, the individuals we have to get together to make this work?” Aha! Now we can see the Dr. Viar who cut his teeth on Chicago education politics! Who savvily wants to identify key leadership roles and groups and  … and ... Plants seeds? “It’s not about my vision, ideas, or solution, it’s ours … I’m not here to lead the college as much as to serve the college … I serve by making sure the committees are addressing the right issues.” “Planting the seeds” of change was a phrase that he used often.

As you see we were striking out all over the place.  You’d think he was Sandy Koufax.  Actually, he looks a little like Sandy Koufax.  Did we mention that his mom was a second grade, and later junior high, schoolteacher? His memories of sitting around the dinner table and hearing complaints about the principal or governing board? How he once imagined growing up to be the kind of school principal that would actually make teachers happy? In trying to probe further, we hit him with the ‘structural deficit.’  That’s always a land mine.  Notwithstanding early rumors that he was ‘adept’ at dancing around mines, Dr. Viar was not afraid to express his agreement with this assessment of Dr. Rigg’s.  “When we are spending 87% of our budget on salaries and benefits…”, he opined that we have to be careful that our (non-personnel) support of our educational programs and facilities did not get the short end of the stick.  Was he advocating for wholesale changes in programs?  Not so.  He gave the clear impression that the decisions that we have to make in education can be made thoughtfully and patiently. Yet we did find him willing to take a stand. On the subject of the two-tiered community college funding plan, the legislation for which (a pilot program) is on the Governor desk, Dr. Viar was unequivocal.  “I happen to be in complete agreement with Chancellor Harris, it’s a horrendous idea. It’s a bad idea.”

So, he seems to have dodged the fastballs and the curveballs. We stoop to yellow journalism and decide on character assassination. We look for hubris.

“Personally I am not, in my view, creative,” Viar tells us. Rewind the tape! “I tend to be attracted to creative ideas. I have always admired those who are creative and come up with wonderful new approaches to dealing with things.” Okay, so maybe he can admit to an imperfection in himself, but how well does he tolerate them in others? We pursue this idea of creativity in education and educational administration. “It’s okay to experiment, it’s okay to be innovative,” Viar reassures. “You’re not going to get slapped around because you failed with that effort.” In fact, he says, it’s always important to ask “Is there something we could have done to help that [project] be successful? As long as you’re open with what you’re doing … it’s okay to experiment … to be innovative.” In contrast to personal creativity, Viar opines, “What I am good at, I believe, is encouraging and supporting those who have come up with great ideas, and taking those ideas and trying to help get them accomplished. ”

So that’s it.  Our muckraking credentials are seriously in question.  We heard a rumor of a YouTube video, but we couldn’t find it.

Back to October 2013 Table of Contents   Next Article