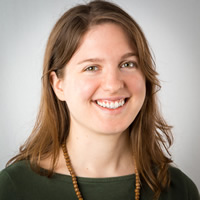 I had a chance to sit down with Caroline Hallam, our new full-time Distance Education (DE) and Open Educational Resources (OER) librarian, for an impromptu interview. Although we talked about a lot of really exciting projects that Caroline is working on for our library and campus, I’ve limited this version of our conversation to her thoughts and experiences with OER.

Caroline comes to GCC from Raleigh, North Carolina. Her husband has just begun law school at USC, so she was delighted to be offered the job at Glendale. It also suits her well because of her focus on DE and OER throughout her Master’s, as well as her first two jobs out of grad school.

Caroline completed her Bachelor’s in Economics and Organizational Management at Agnes Scott College in Decatur, Georgia. After graduating, she went to Thailand for a year to teach English as a Foreign Language. When she moved back home, she enrolled at UNC Chapel Hill to get her Master’s in Library Science. During grad school, she worked part time as a research assistant in the library with leaders on the campus in digital design. Caroline ran the Skillful Workshops where instructors could learn basic Adobe, HTML, and CSS. She worked in the e-reserves program in the Undergraduate Library which introduced her to copyright clearance for materials used in online courses.

After graduate school, Caroline worked as the instruction and electronic services librarian at Central Carolina Community College which served three fairly rural counties in North Carolina. The “research triangle” also included several cities with large universities, so the libraries served a mix of students. At the community college, Caroline recalled, “Each semester I had a few students who would come into the library and who were literally crying because they hadn’t known that the textbooks would be that expensive when they went to the bookstore. And they were saying, ‘Please tell me that you have this resource.’ And we generally didn't.” Inevitably, Caroline wondered why not? She was surprised to discover that there was no OER program on campus – there was no organized OER program on any of the 58 community college campuses in the state, despite a general awareness of the need for textbook affordability.

In 2016, Caroline began working for NC Live, North Carolina’s statewide cooperative of 205 public and academic library systems. Every three years, the consortium negotiates a package of electronic resources such as databases, along with specialized resources like Reference USA, which NC Live purchases for the entire state. Caroline points out that the return on investment is immense: “for every one dollar that NC LIVE spends, North Carolina communities get access to twelve dollars of resources.” Not to mention, becoming an informed electorate… Caroline conducted professional development for approximately 6,000 FTE librarians across the state during her time at NC Live, and eventually became the OER Librarian. Her first act as the instruction librarian was to put together an Open Educational Resources panel for the North Carolina Community College Libraries Association Conference. This interest in OER was in part because of her experiences at Central Carolina CC, and in part because of her own student days.

OER is always being developed and improved. For one thing, if you don't like it, if you think that the quality is low, or it doesn't fit your course, you have the ability to take that and make it better. You don't have to start from scratch. You can start with what's there, and make it fit your course. – If there’s a typo, you can fix that typo! You're allowed to do that through that open licensing. So, I think there are answers to a lot of faculty questions.

“Publishers were so predatory. As a student, I would buy an old edition of a textbook and then I would get the new version off the reserve desk and I would go through it page by page to compare and see what was different. Some of the textbooks, they'd just changed the page numbers and changed the order of the problem sets. And that was it. So that the publishers could make a new edition! That's not an improvement, that's a money grab. So, as a student I was disgusted by that. Also, textbook prices have skyrocketed compared to the consumer price index and not everyone is aware of that because when the instructors who are assigning the textbooks went to school, the books weren't that expensive. So, I was really interested in OER for that reason. I was also interested in OER because of my education at library school. And I like the possibilities: you can reuse and remix and share your creations with the world and keep iterating and improving. It's also an equity issue worldwide, access to information and education. So that's something that appealed to me. Not to mention the experience of seeing students who were already up against it - were economically disadvantaged at my community college and were trying to improve their lives through education! There were a lot of first-generation students at CCCC who didn't know that they were going to have to set aside all this money for textbooks. And that their success in their classes was going to rely on being able to pay for these textbooks and be able to keep up in their classes. They were crying in the library because they didn't have access to it. Some of them were waiting on financial aid to come through, but that gap was enough that it was going to put them behind in their course. So those things were all things that drew me to OER.”

As the NC Live OER librarian, it was Caroline’s responsibility to direct the OER program, Open Education North Carolina (OENC), for the 111 community colleges, colleges, and universities served. The program had three prongs: training and education about OER for instructors, librarians, and other interested folks, a curated repository of OER targeted at the 22 most frequently taught courses in NC and $1000-$2000 OER adoption grants for faculty. The grants were for replacing commercial textbooks with existing OER materials, and some faculty developed ancillaries (workbooks, quiz banks) or edited existing OER materials to better fit their classes. Caroline also facilitated training events across the state alongside experienced OER librarians from the University of North Carolina system schools. From these librarians, she learned a lot more about finding OER and engaging wary stakeholders!

Caroline accepts that there will be early-adopters, eager adopters, equity-minded adopters, and reluctant adopters among her manifold stakeholders. She’s also aware that an anxiety exists about the quality of open educational resource materials, and she shared her thoughts on this: "OER is always being developed and improved. For one thing, if you don't like it, if you think that the quality is low, or it doesn't fit your course, you have the ability to take that and make it better. You don't have to start from scratch. You can start with what's there, and make it fit your course. – If there’s a typo, you can fix that typo! You're allowed to do that through that open licensing. So, I think there are answers to a lot of faculty questions."

...the Open Education Group found that in all of the different studies of efficacy, students' grades did not drop. They were the same or better when you employed OER. And they also found that the vast majority of students and faculty either thought that the OER was the same quality as a commercial textbook, or preferred it. So, it was both: very efficacious, and also people liked it!

To my final question about access-versus-ideal quality, Caroline had this to say: “There's a Florida University study that showed that at least two thirds of students at some point in their college career, did not buy the required textbook solely due to cost. From there, all these knock on effects follow. There are all these things, like approximately 20% failed a course. All sorts of things just because they didn't buy the textbook and didn't have the material that was going to help them succeed in the class.”

“That is a huge equity issue because who’s not buying the book? It’s the student who can’t afford it. There’s also a study, ‘The Impact of Open Educational Resources on Various Student Success Metrics’ by Colvard, Watson, and Park, that came out at the end of last year. Now this is a preliminary finding; it was a small group. We need more data before we can make a really broad conclusion, but I think that it's very promising: they found that using OER in your class actually reduced the DFW (drop, fail, and withdrawal) rates for underserved populations: part time students, non-white students, and Pell Grant recipients. OER actually narrowed that achievement gap. Full-time, white, and non-Pell grant recipients also improved a little bit. But the most improvement was seen from those traditionally underserved populations. That’s amazing.” She added, “In their ‘Review Project’ - a summary of published research on OER - the Open Education Group found that in all of the different studies of efficacy, students' grades did not drop. They were the same or better when you employed OER. And they also found that the vast majority of students and faculty either thought that the OER was the same quality as a commercial textbook, or preferred it. So, it was both: very efficacious, and also people liked it!”

Caroline concluded, “If you need support – need someone to talk to about OER? Well, hey I'm here now. I'm responsible for that! I'm happy to talk you through licensing issues or finding OER, or how to incorporate it in your course!”

Many thanks to Caroline for dropping everything on a Monday afternoon to talk to me, and for so many exciting ideas about Distance Education and Information Competency which ended on the cutting room floor!

You can find Caroline in her office in the Library, through her email: challam@glendale.edu, or at extension 5871.

You can also check out GCC’s OER guide: https://campusguides.glendale.edu/oer