Doris Martin (Credit ESL) starred in A Little Push, a short film directed by Anrees Moret (Spain). The screening was held at Warner Brothers Studio in the back lot and is being submitted to major festivals. She enjoyed being a Hollywood star for a day. Enter IMDB (Doris Martin) to see 1.5 minutes!

Angela Morales has four essays out in the following literary journals:

Michael Reed (Associate Professor of Geography) and Shannon Clark (GHS English teacher) were married on Saturday, September 24, 2011 in a lovely beachfront ceremony and reception at Westward Beach in Malibu. Daughters Catalina Clark-Reed and Sydney Michelle Clark-Reed were gorgeous flower girls. At the end of the reception, the groom and a couple of the guests headed for the Pacific Ocean and caught a few quick waves before the one night "mini-moon" in Hermosa Beach.

Kathy Seifert’s daughter, Shannon, and her husband, Terry, welcomed their first baby (a boy) this spring. Edison "Eddy" Drake Schwarz was born on the morning of May 25, 2011. He weighed 8.11 lbs. and was 26 inches long.  They make their home in Juneau, Alaska, where Eddy is apparently thriving—as he approaches his 5th month, he's topping the scales at 18 lbs. 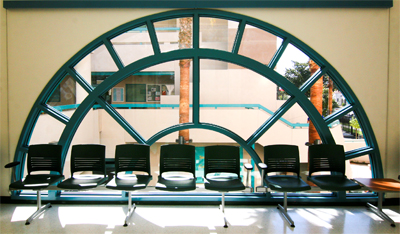 This photo of the new Mariposa building at Garfield appeared in the October 2011 Chaparral, without a photo credit. The photo was taken by Pat Bradley.

Do you have any milestones to share with us?
Send them to: piper@glendale.edu