Image:
The ninth floor of the Asch Building, from Triangle:
The Fire that Changed America by David Von Drehle 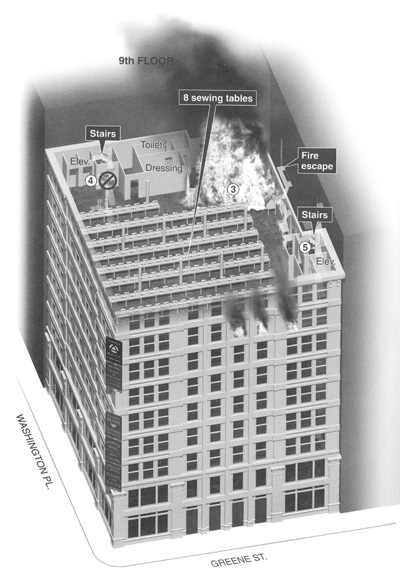 One hundred and forty-six workers were either incinerated or their bodies crushed by the nine-story plunge from the windows of the burning factory. Most of them were women, most were Jewish immigrants from Eastern Europe, all were garment workers for the Triangle Waist Company. These workers had no union, and no protections of any kind. They worked under cruel and unsafe conditions, for low pay, no benefits and little hope for the future.

A headline from the New York Evening Journal over a sketch of a flattened body proclaimed “This Is One of a Hundred Murdered.”  In the end the feckless owners of the unsafe building weren’t convicted of murder: they were fined $20.

Although this happened one hundred years ago in New York City, it bears many lessons for today and is rich in history that can inspire classroom discussion about a variety of social and economic issues—particularly workers’ rights and women’s rights. It also provides an introduction to the origins of the union movement.

As is once again painfully obvious, workers must continually struggle for rights and fair treatment within an unfettered capitalist system.

What Triangle demonstrated was that workers don’t get anything without a fight and have no power without organizing. And it is also a legacy to brave women who spearheaded unionism in the cruel working world of the New York garment district at the tail end of the first Golden Age—a time not unlike our own.

Three important movements sprang in part from that disastrous day in 1911: the progressive movement, the union movement, and the women’s rights movement.

Brave workers, many of them women like Rosie Freedman, Clara Lemlich and Rose Schneiderman, and progressive leaders like Frances Perkins (one of the masterminds of Social Security), changed the face of the country and turned around a system in which unrepresented workers, accustomed to 84-hour work weeks, won such concessions as Sundays off and safer working conditions. Unions such as the International Lady’s Garment Workers’ Union provided dignity in the workplace that had never before existed.

Progressives like Teddy Roosevelt and Al Smith were elected president and governor of New York. It was no longer a Golden Age for the super-rich, but the birth of rights and dignity for the working class. And, of course, in 1920 women finally won the right to vote.

Triangle was pivotal to this change of climate. It wasn’t the only shocking industrial disaster, but perhaps because of the timing, because of the preponderance of women victims, because of the particular venality of the garment factory owners, it was of pivotal historical significance.

Perhaps the best book written about Triangle and the surrounding events is Triangle: The Fire That Changed America by David Von Drehle, who calls the tragedy and subsequent strikes “a complete rethinking of the place of women in society.”  He also says that it propelled the idea that the “nation’s politics were primed for a shift to the left.”

There are other good books about the Triangle story, including Leon Stein’s The Triangle Fire, but what sets Von Drehle’s account apart is his complete listing with biographical sketches of all the victims and his discovery of the transcripts of the subsequent egregious trial of the factory owners—which had been thought to have been lost.

He also clearly places the fire and surrounding events in the social and political context of the time.

The book is particularly relevant to our campus, which is largely composed of immigrants trying to make better lives for themselves just as those in Triangle were trying to do a century ago, and when I have assigned papers relating to the book students have responded with encouraging interest. One Latino student said his relatives worked under very similar conditions not long ago right here in Los Angeles.

In a class-assigned paper a middle-aged woman who was struggling as a single mother returning to school said, “Today’s forty-hour week is literally a result of the blood, sweat and tears of pioneer union organizers like Clara Lemlich and Rose Schneiderman and their followers.”

Another writer said, “To those people who were involved in the Triangle fire, I say ‘thank you.’”

One was moved to say: “The luxury we live in was brought about by the waves of support and recognition that reformists received after the fire, and the current state of the country we know and love is all the better thanks, largely, to the beginnings of it all and the lives lost on that fateful March afternoon in 1911.”

But one made the particularly perceptive point that “to this day factories run on the same principles of pure profit that continue to exist in the United States. The reform built around such incidents as the Triangle Shirtwaist Factory fire in 1911 should be a clear reminder …. [that] the fire is also a warning of the toll in human life of poor management on the part of both government agencies and businesses over the working class in modern America.”

I intend to use the Triangle book in an English class this spring. It will be the 101st anniversary. But it’s never too late.