Sat on the shelf
In a curious corner
Of an odd room
I left long ago—
When I didn’t presume
I’d ever need claim it,
But could just as easily
Allow it to rest
In the remote place
I thought was shelter.

Who could approach it then?
When the dreaded sound
Of the tick tock in its belly
Wound down each day,
As if the next hour doomed
The enormous clock I wore
Strapped to my chest
For the world to see.

Now I find I envy
The life of a hobo,
Whose toes keep him
Forever on the go—
Following only the row
Of track after track,
A straight line set
Against the distant horizon
And the stink eye of time. 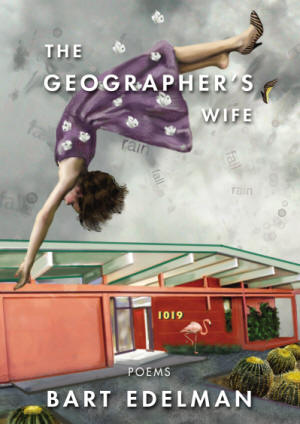 Bart Edelman’s newest volume of poetry, The Geographer’s Wife, (in which “Start Here” and “Retirement” appear), will be published by Red Hen Press in February 2012. Bart completed the collection during his 2010-11 sabbatical, and its publication is coordinated with this year’s AWP Conference, to be held in Chicago.  The Association of Writers and Writing Programs is the most prestigious writers’ conference in the nation.
As well as having his work anthologized in numerous collections read throughout the United States, Bart has published five earlier books of poetry, Crossing the Hackensack (1993), Under Damaris’ Dress (1996), The Alphabet of Love (1999), The Gentle Man (2001), and The Last Mojito (2005). He has also been the recipient of grants and fellowships that have enabled him to conduct literary research at home and abroad.

Bart has been an instructor and Professor of English at Glendale College for more than thirty years. He is the founder and editor of GCC’s nationally recognized literary journal, Eclipse, which is unique among two-year college journals in that it publishes student poetry side by side with works by some of our most renowned contemporary authors. Bart has rightly claimed that many a graduate school would be proud to call Eclipse its own. He has remained true to his original vision to reserve 15-20% of the journal for works written by students—who are staggered, honored, and read! when they appear within its pages.

In September, Bart read from The Geographer’s Wife at the Armory Center in Pasadena, and will give several more local readings beginning in the spring. There will be a series of East Coast readings in the fall of 2012.  In the immediate future, he has organized a public reading for Eclipse authors, student and seasoned, to be given on Sunday, November 13, 2011, at 2 p.m., at the Ruskin Art Club, 800 South Plymouth Blvd., LA, (323) 936-4632.  This will be a terrific afternoon of artists ascending, and at their apex.

Encourage your students to attend.

Start here,
In the heart of the country,
Where Yes is the only word
That needs to be heard—
Affirmations like candy:
A stick of sugared gum,
The sweet peppermint drop
On the tip of your tongue,
A taste the initial kiss
Left, forever, on your lips.

Start here,
In the heart of the country,
Where there is nothing
But a spare sigh
And the well-trained eye
To guide your quick step
Along the gilded path
You forgot to take,
When spring brought its offering—
One petal at a time.

Start here,
In the heart of the country,
Because nearness is so far
Across each pointed star
You swore you could reach,
In the sleepless hour
Faith drew her ring of fire
Around the halo you wore,
Long before night shadows
Whispered the answer was No.