Should this chart concern you? 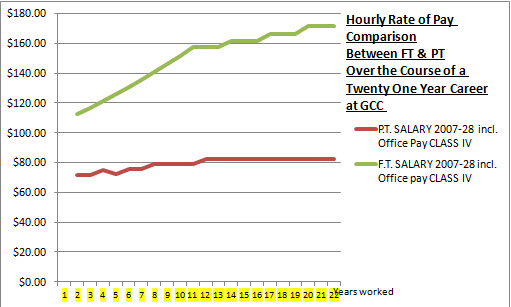 There has been a lot of talk lately at Glendale College about adjunct faculty taking a pay-cut in order to retain their “parity percentage” (which is what occurred in fall 2012)  or the district including the “parity percentage in the base” as part of our current negotiations.

What is “parity” and why should adjunct faculty care?

Parity is actually a percentage comparison between what part-timers and full-timers are paid for the teaching, preparation and grading that both groups do.

A study that was done in 2001, by the California State government showed that adjunct faculty were being paid very poorly in relation to full-time faculty at community colleges, for essentially the same work. While full-time faculty were being paid not only for their teaching hours, they were also being compensated at a rate of one hour for each hour in the classroom, to cover preparation and grading. Part-time community college faculty, on the other hand, were only receiving half the pay because they received no compensation for hours of course preparation, lesson planning, assessment of tests or grading of papers.

The poor pay for part-time faculty in relation to full-timers, despite the similarity of their occupation, was recognized not only by unions but also by the State Chancellor’s office and finally by the state legislature. The rallying cry became “equal pay for equal work”. Finally in 2002 the State budget provided a $50 million categorical part-time equity line item that was distributed to community colleges to be used only to improve the “parity” pay of adjunct faculty. Part of the legislation also asked districts to come up with a parity percentage goal and definition so that, this small fund, would kick start an awareness that adjunct faculty pay needed to rise to a certain point to create pay equity among faculty.

Some districts immediately took the money and included it in the “base pay” for adjunct faculty and set goals for part-time pay parity of 70-100% of what full-time faculty were paid. “Base pay” is the foundational rate of pay that an employee receives. If raises are given then the base pay receives the raise. However in the Glendale College District, the equity money was put on the base pay as a “parity percentage”. At first this parity percentage stood at 13% which brought adjuncts a little closer to the rate of pay that full-timers enjoyed.

However over time, the equity line item was reduced in the state budget and with a few raises to the base pay (pre-2008), the parity percentage diminish to less than 10%. When another state budget came out in 2008 that further cut the categorical line items the district whacked a further 3.76% off part-time pay by cutting the parity percentage again.  Today the parity percentage stands at a little less than 6% but the district claims that it should only be 4%. Meanwhile, other districts that had put the equity money in the base salary, continued to backfill the lost revenue from the state so adjunct faculty salaries kept step with the full-time faculty salaries. Not only that, but those who had the parity money in their base got raises on that parity money each time their district provided a raise to faculty. Not so at Glendale College. 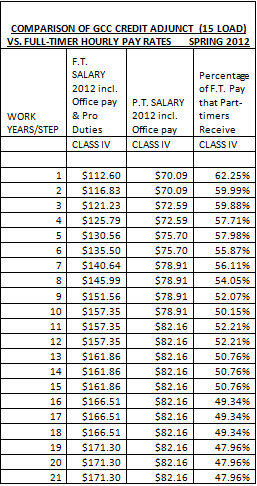 So where are we now? GCC adjunct faculty have fallen woefully behind their full-time colleagues in the area of pay. There was always an understanding state-wide, that part-timers, who are not required to participate in professional duties such as committees, curriculum work and program review, should be paid around 87% of what a full-timer was paid. If office hours were not included in part-timer pay, then they should expect to be paid 75% of what full-timers in the district made. Many of our surrounding districts are working toward these goals. Rio Hondo College has set a goal of 82.5% and currently the district pays all adjunct faculty at 60% of what full-timers are paid across the board.  Antelope Valley College pays all adjuncts at 66% of that full-timers make; with a goal of 100%. However if one looks at the top pay scale that a part-timer can expect to be paid at GCC, and one compares it to that of a full-timer (who still has one column of higher pay beyond Class IV) one can see that the percentages are well below the state-wide parity expectations of 75%.  Moreover, the longer one teaches in the district the larger the disparity between full-time faculty and part-time faculty pay.

What can be done? 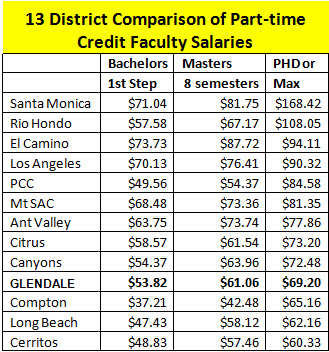 Part-time faculty at Glendale College appreciate our beautiful campus, the excellent facilities, intelligent caring colleagues and enthusiastic motivated students. It is a joy to be working in this stimulating environment with wonderful people.  However the cost of out-of-pocket medical premiums, gas and space in one’s home for an office (all areas that require additional outlay for part-timers) continue to rise while adjunct salaries at GCC seem to be going backwards. The Glendale College district recognizes, for all other employee groups from classified office workers, to full-time faculty to management, that years of experience and additional training or degrees are worth more pay. Their salary schedules reflect this awareness and in retirement they benefit from it.  It is only part-time faculty members who lose out as they extend their training and their teaching career at this institution.  Isn’t it time we did something about that?