by Paul Sherman and Joanna Parypinski

The Music department at GCC offers an impressive variety of music courses and ensembles, including the choir, concert singers, West African drumming ensemble, jazz, guitar, the orchestra, and more. With such a robust music department, students here have wonderful access to performances and music training. We would like to appreciate the hard work and immense talent that goes into these excellent offerings on campus, so today, we’re highlighting the GCC orchestra.

Church of the Good Shepherd 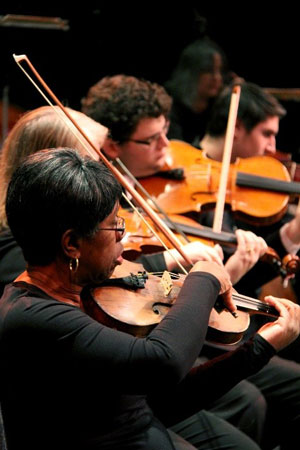 Pieces to be performed:

Sibelius’s Finlandia in collaboration with the GCC College Choir under the direction of Dr. Peter Green

Dr. Peter Green was born in Newfoundland, Canada's most easterly province. He received his Master of Music and Doctor of Musical Arts degrees with full scholarship from the University of Southern California under the direction of Stewart Gordon, where he also served as Assistant Lecturer of Piano. In July 1989, he received first prize in the national piano competition of the Canadian Federation of Music Teachers Associations in Edmonton, Alberta. Dr. Green currently serves as Chair of the Visual & Performing Arts Division at Glendale College. Dr. Green is also director of the Glendale College Concert Singers. In addition to his duties at the College, Dr. Green is Director of Music at Church of the Good Shepherd in Arcadia, California. Dr. Green is on the board of directors of NACM (National Association of Church Musicians), Glendale Arts, and the Mark Thallander Foundation. Dr. Green has recorded a CD of music for piano, horn, and flute, released in May 2008, that was nominated for a Grammy Award. Just recently Dr. Green recorded a piano/organ CD with organist Mark Thallander that was released in Spring, 2017. He was asked to conduct the Mark Thallander Foundation Chorus at the International Haydn Festival in Vienna, Austria in July 2009 and was conductor of the Mark Thallander Foundation Chorus in Maui, Hawaii in April, 2016.

Catherine Chan Biagini began studying piano at age 4 and added the cello at age 9, studying with Raymond Davis, principal of Seattle Symphony. She earned a Bachelor’s degree in Music Performance from the University of Washington, studying with Toby Saks. She has been principal of Savannah Symphony and Northwest Chamber Orchestra, where she performed all six Brandenburg Concerti with Ken Cooper and Ransom Wilson among others. She has worked with Yo-Yo Ma, Itzhak Perlman, Pinchas Zukerman, and Mstislav Rostropovich, and participated in festivals in Italy, South Carolina, Texas, California, and Oregon. Soloist appearances include Savannah Symphony, Hilton Head Chamber Orchestra, and Santa Cecilia Orchestra, Pasadena Community Orchestra, most recently with the Santa Cecilia Orchestra in Feb. 2017. Tours include the United States, Italy, and China. Current positions include principal cellist with Asia American Symphony, Santa Cecilia Orchestra and Burbank Chamber Orchestra as well as a member of Santa Barbara Chamber Orchestra. On the wilder side, Catherine is a member of Angels of Venice, a band performing repertoire from Renaissance to Metallica, with whom she has released six albums. Cathy lives in La Crescenta with her husband and two children.

Beethoven’s Symphony No. 2 in D major

What’s new with the orchestra?

Dr. Paul Sherman is the new director. We are looking to grow the numbers in the orchestra. Did you play an instrument in H.S. and do you want to continue to play? We would very much like to have you join the ensemble!

Dr. Paul J. Sherman enjoys a varied career as a conductor, oboist and musicologist. He performs on both modern and baroque period instruments and enjoys a career with many different musical branches including jazz, classical and early music. His doctorate is in oboe performance with minors in conducting, early music and music history from USC. While there he was honored as the universities top wind graduate in 2007. Dr. Sherman has been on the faculty of USC as Instructor of Early Music and Director of the Oboe band, at Chapman University as Director of the Wind Symphony and Coordinator of winds and brass, and at College of the Canyons as Director of the Symphony of the Canyons. He is Music Director of the Santa Clarita Valley Youth Orchestra Foundation. As a performer he has appeared with the LA. Chamber Orchestra, Los Angeles Philharmonic, LA Master Chorale, Santa Barbara Chamber Orchestra, Santa Barbara Opera, Southwest Chamber Music, Santa Fe Pro Musica and Music Angelica among many others.

The GCC Orchestra is a unique combination of students, faculty, and community members. This creates a wonderful dynamic of those who have played for years, those in the middle of their careers, and those looking to maintain musical skills. Everyone is here to have some fun.

If you play an instrument and are interested in joining the orchestra, get in touch with Paul Sherman at psherman@glendale.edu.